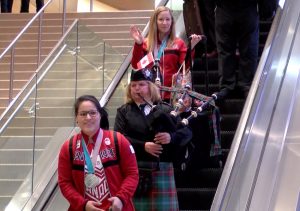 WINNIPEG — A hero’s welcome greeted Winnipeg curler Kaitlyn Lawes and Canadian women’s hockey player Brigette Lacquette on Monday night as they both returned from the Pyeongchang Winter Games with Olympic medals in tow.

Dozens of fans waving Canadian flags were on hand at James Richardson International Airport to see Lawes and Lacquette come down the escalator amid a bagpipe ceremony.

“It’s been an emotional month,” Lawes told media after hugging loved ones. “It’s so special to be able to come home and see all my friends and family.”

Lawes says she has about two weeks off before getting back into the training groove. She also plans on dropping the puck at Tuesday night’s Winnipeg Jets game.

“I don’t have too many plans quite yet… try and do some laundry and catch up on some rest.”

It’s the second gold medal for Lawes, who took a leave from her regular role as playing third for the Jennifer Jones team, which won women’s gold at the 2014 Sochi Olympic Games.

The 29-year-old was new to the mixed game, but quickly studied up with Morris to win the January trials before the sport’s Olympic debut.

“It was definitely such an honour to represent my country and not only my country, but First Nations people across Canada,” Lacquette said.

“It was a tough game and when we didn’t win (gold), but it’s all the support across Canada… it definitely helped.”