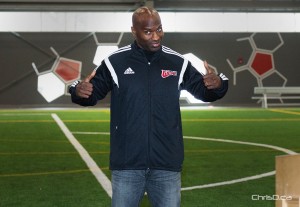 An inaugural football clinic run by CFL Hall of Famer Milt Stegall is opening up this spring.

The former Winnipeg Blue Bomber-turned-TSN broadcaster will host the Celebrity Football Classic in Winnipeg from May 4-6.

“Ever since I stepped foot in Manitoba, it’s been my second home, the people, the community has accepted me as one of their own,” Stegall said.

The classic will include the 24 Touch Football Team Tournament, open to all ages and skill levels, giving players a chance to play alongside Blue Bomber alumni. Teams of 12 can register for $100 per player at miltstegallclassic.com.

Proceeds from the tournament will benefit The Never Alone Foundation, Variety, the Children’s Charity of Manitoba and the newly created Milt Stegall Legacy Fund.