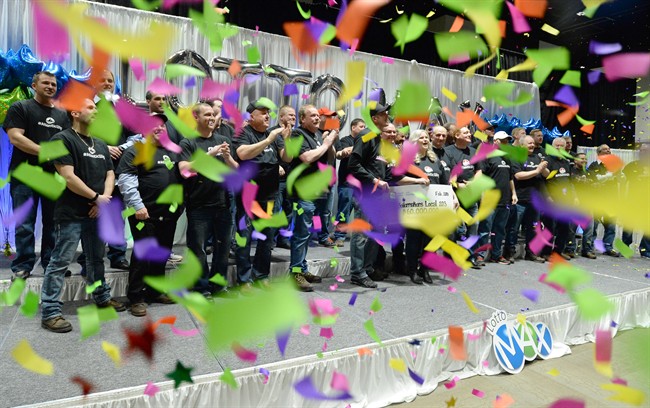 Thirty-one members of the Boilermakers Local 203 at the North Atlantic oil refinery in Come By Chance, N.L., collected their shares of a $60 million Lotto Max jackpot Wednesday in St. John’s. Each member of the winning group collected a cheque for $1,875,000.09. One additional amount of $1,875,000.09 is being held until resolution is reached on a potential thirty-second winner. (THE CANADIAN PRESS/Keith Gosse)

ST. JOHN’S, N.L. – Thirty-one oil refinery workers — including twin brothers, a married couple, a father and son and three people who live on the same street in a tiny Newfoundland town — took on the mantle of millionaire Wednesday.

The winners and about 300 jubilant family members gathered at a St. John’s convention centre to receive $60 million from Atlantic Lottery Corp. after the group bought the winning Lotto Max ticket last week at a gas station in Holyrood.

All are members of the Boilermakers Local 203 trade union at the refinery in Come By Chance.

“I got the richest crew in the country,” Lee Hickey joked as he and the other winners assembled two rows deep on a stage, all wearing black T-shirts.

They beamed as they described their shock upon finding out they had the matching numbers for the biggest jackpot in Atlantic Canada to date and one of the top five in Canada.

“I had to contact everyone because there’s 31 in our group … They would say silly things like, ‘Are you drinking?’ I told them all the same story — we’re millionaires. This is not a joke. We are millionaires!'”

Moore Hickey, who has been buying lottery tickets for her refinery co-workers since November, said a group member disrupted the quiet of their Avondale home with a phone call at about 4:30 a.m. Saturday and urged her husband to check their numbers.

The call was prompted by Eugene Lewis, 63, who woke up early Saturday and checked the results, seeing news that there was a winner in Newfoundland and Labrador.

Lewis woke up his wife and said, “I think we got that lotto.”

Four other winners, who range in age from 24 to 63, also retired almost immediately after getting word that they would get about $1.9 million each. For Moore Hickey, that’s multiplied by two since her husband also kicked in $5 for a group purchase of $155 worth of tickets.

Standing on stage with the rest of his colleagues, Lee Hickey joked that his work mates were now known as the “A Team.”

“It’s just overwhelming and a great start for everyone’s life,” he said.

In addition to the Hickeys, six winners are from Avondale and three of them live on the same street in the town of 600.

“We can’t believe this happened to our area and to see this happen in a small town in Newfoundland is great,” he said earlier this week. “It will definitely benefit us — that’s no doubt. We’re on the map right now!”

Some of the winners say they plan to pay off mortgages, invest in their kids’ education funds or buy new cars. Moore Hickey has already bought a car, while her husband picked up a new truck.

Moore Hickey said for now, she plans on sticking with her job as a boilermaker at the refinery and may become semi-retired.

– By Alison Auld in Halifax