Home » Sports » ‘We Need to Show Up:’ Bison Women’s Hockey Ready for Playoff Tilt with Huskies

‘We Need to Show Up:’ Bison Women’s Hockey Ready for Playoff Tilt with Huskies 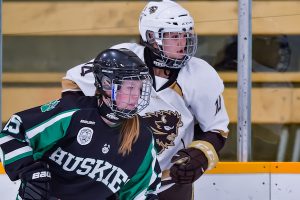 The Bisons and Huskies clash in a weekend playoff series at Wayne Fleming Arena on Friday and Saturday. (JEFF & TARA MILLER / BISON SPORTS)

WINNIPEG — After a thrilling quadruple overtime and tiring seven periods of hockey last Sunday, the Manitoba Bison women’s hockey squad isn’t letting up when they head into the Canada West Final this weekend.

The No. 1-ranked Herd host a best-of-three playoff series Friday and Saturday against their prairie rivals the Saskatchewan Huskies.

“It’s a unique situation when you’ve already qualified for the big dance, this can’t become anti-climatic and that’s what we have to really think about in the next two to three days,” said head coach Jon Rempel. “I think this group will handle it the right way.”

Both teams stack up well against each other, with Manitoba and the No. 8-ranked Saskatchewan splitting the season series in four low-scoring games.

It’s the first time in the program’s 21-year history Manitoba has hosted a conference women’s final. Manitoba holds a 2-7 record in conference final play and last played in 2016 with a 2-1 loss at UBC.

The Bisons are sitting solid in goal with rookie netminder Lauren Taraschuk at the helm. The first-year J.H. Bruns graduate also picked up the Canada West Women’s Hockey Rookie of the Year honour on Wednesday.

“It’s huge for me. Honestly, after the season that I had, I didn’t really expect to be where I am. It’s a huge honour for me,” Taraschuk said.

Coach Rempel also shared some of that spotlight by being named the 2017-18 Canada West Women’s Hockey Coach of the year.

“I’m not big on individual awards,” a modest Rempel added. “When you have the luxury of coaching this group and these kinds of players, I’m just fortunate to have that opportunity. This team kind of coaches itself — they’re a pretty mature group that takes a lot of responsibility on their shoulders. I would say it’s a lot more about them than it is about me, quite honestly.”

The Bisons also have forward Venla Hovi in their corner, who recently returned from the Pyeongchang Winter Games with an Olympic bronze medal win for Team Finland.

“We have really, really tough games coming up… we need to show up like we did last weekend,” said the fourth-year student.

Puck drop is Friday and Saturday at 7 p.m. (Wayne Fleming Arena). A third game will be played on Sunday, March 4 at 5 p.m. if Manitoba and Saskatchewan split the series. Tickets are available at the door for $12 (adults), $7 (non-U of M students and seniors), while children under 17 are free. U of M students are also admitted free.