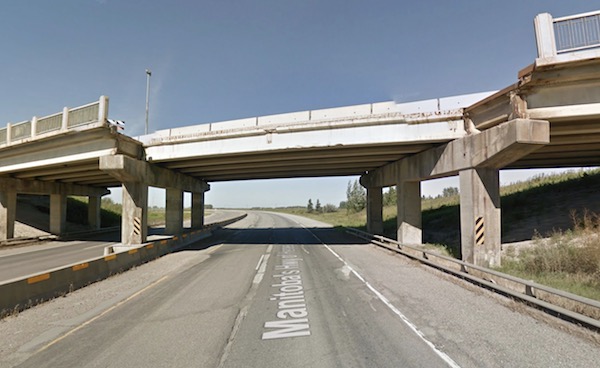 The Portage la Prairie overpass above Highway west of the city will be replaced. (GOOGLE STREET VIEW)

The Manitoba government will replace the aging Portage la Prairie overpass along Highway 1 on the west side of the city.

The bridge has been struck several times by trucks, often forcing its closure while engineers can assess the recent bout of damage. The bridge is currently only accessible in one direction, with some traffic being diverted through Portage.

Infrastructure Minister Ron Schuler says the province is in the initial stages of replacing the structure that was built in 1968 and design work will start later this year.

During its design phase, the height of the overpass and other national design standards will be taken into consideration.

“The current limited use of the overpass is safe, but it is time to look at replacing it to ensure the future safe and efficient movement of people and goods,” said Schuler. “As construction season ramps up for the spring and summer, we remind all motorists to be careful around work areas and slow down.”