TappCar Revs Its Engines to Signal Ride-Sharing in Winnipeg 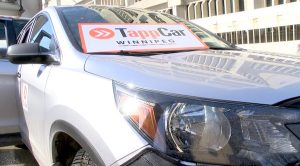 A TappCar vehicle parked on King Street during the first ceremonial ride on Friday, March 2, 2018. (CHRISD.CA)

WINNIPEG — TappCar, the relatively unknown Edmonton-based ride-sharing company, made history Friday by becoming the first such service to begin operating on city streets.

During a ceremonial ride in front of City Hall, St. Boniface Councillor Matt Allard hopped into a Honda CRV and was whisked over to the Manitoba legislature for lunch hour meetings.

“It feels a little bit more like my car, but clean,” Allard quipped.

Company spokesperson John Morris says they had about 12 vehicles on the roadway on launch day, but added they hope to have at least 150 driving by next Friday.

“Winnipeggers have been waiting for more choice in the marketplace, and we hope the resulting competition will provide citizens with better service options.”

TappCar is one of four companies looking to make a name for itself in the local ride-sharing market. Calgary-based Cowboy Taxi and Toronto-based InstaRyde also have apps, while U2GO is a local start-up. InstaRyde wasn’t available as of Friday, while Cowboy Taxi showed only one available vehicle. U2GO didn’t appear to have a website or app yet.

Ride-sharing arrives as Winnipeg’s taxi industry tries to improve its reputation and customer service to compete with the new players. Local companies Unicity and Duffy’s have had its drivers undergo new training to better address customers’ expectations.

Uber and Lyft — two of the major ride-sharing names in North America — have yet to lay down solid plans to begin operating in the province, citing Manitoba Public Insurance’s restrictive coverage policy on its potential drivers. MPI and the Public Utilities Board will reevaluate current legislation and policies in June.