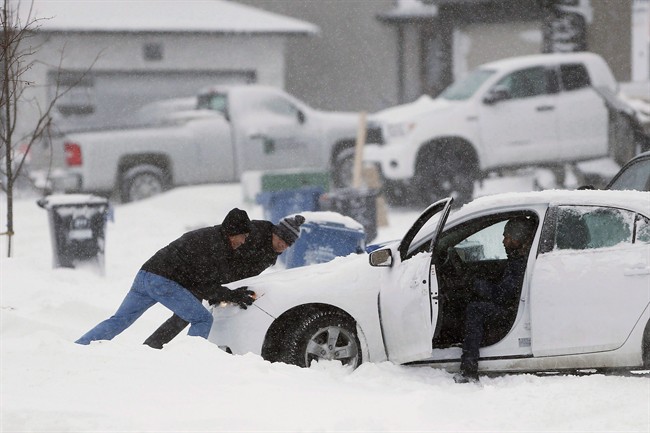 People push a stuck car after two days of snow in Winnipeg, Wednesday, December 7, 2016. The City of Winnipeg has declared a snow route parking ban for this weekend. (THE CANADIAN PRESS/John Woods)

WINNIPEG — A Colorado low making its way into Manitoba this weekend has prompted the city to declare a snow route parking ban, just days after it ended for the season.

Parking will be prohibited on snow routes between midnight and 7 a.m. starting Sunday overnight into Monday morning.

The city says its crews are prepared to deal with the snow in the forecast, which Environment Canada says could be anywhere from 15 to 30 centimetres.

Vehicles parked in violation of the parking ban may be slapped with a $100 ticket ($50 if paid early), and may be towed. The ban will be in place until further notice from the city.

The province also issued its own statement Friday afternoon, reminding motorists to adjust their driving habits to the winter road conditions this weekend.

“Driving to road conditions is in everyone’s best interests,” said Infrastructure Minister Ron Schuler. “We remind all motorists to check the weather forecast and driving conditions before travelling, be careful around snow clearing equipment and to slow down.”

Manitoba highway conditions can be found at Manitoba511.ca or by calling 511.