Winnipeg’s Skating Trail Breaks Records Before Closing for the Season 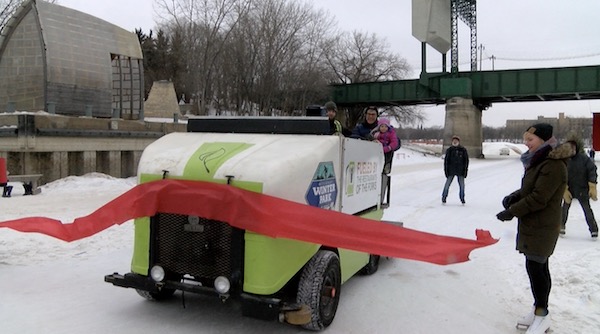 The ribbon is cut to officially open the Red River Mutual Trail at The Forks on Tuesday, January 23, 2018. (CHRISD.CA FILE)

WINNIPEG — The Red River Mutual Trail at The Forks closed for the season over the weekend, but not before setting two new records.

The Forks said on Facebook that the trail was open for a record 72 days. This season also saw the trail span a record 10 kilometres in length.

Officials with The Forks say counters on the Port stairs saw over 50,000 people accessing the river on some weekends, and from the beginning of December to end of February over 600,000 hopped onto the trail.

“Thanks to all those who made great use of the trail this year,” said Peter Jordan, CEO of The Forks.

“It’s exciting to see the city come to life and convene on the rivers in the wintertime – it’s something that makes Winnipeg really exceptional.”

The Forks is no longer maintaining the ice and advises the public to stay off the river.

The trail operated on both the Red and Assiniboine rivers. While it officially opened January 23, sections of the trail were open to skaters in late December.

In 2008, it set a Guinness World Record for longest naturally frozen skating trail in the world reaching 8.54 kilometres.