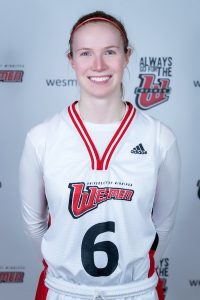 The third-year Germany native picked up the honour Wednesday night during a national championship awards ceremony in Regina.

The award, first handed out in 1997, is bestowed upon a women’s basketball player who shows courage in the face of adversity.

Wenke was viciously assaulted in her Winnipeg home in May 2017 and spent 24 hours on life support following the attack. A Good Samaritan intervened and police said, at the time, that her life was likely saved because of those actions.

Wenke recovered from horrific injuries and eventually returned to the basketball court and her studies.

“She’s full of courage and I don’t know anyone stronger than her,” said Wesmen head coach Tanya McKay.

The award’s namesake is after former Brandon Bobcat Tracy MacLeod, who suffered what appeared to be a career-ending knee injury in a game in 1993. Complications ensued during multiple surgeries after that and MacLeod would eventually have her leg amputated below the knee. MacLeod returned to the Bobcats the following season, training with the team just a few weeks after her amputation.

Wenke is the second Wesmen to win the Tracy MacLeod Award. Heather Thompson was awarded the honour in 2003-04.

— With files from UWinnipeg Wesmen