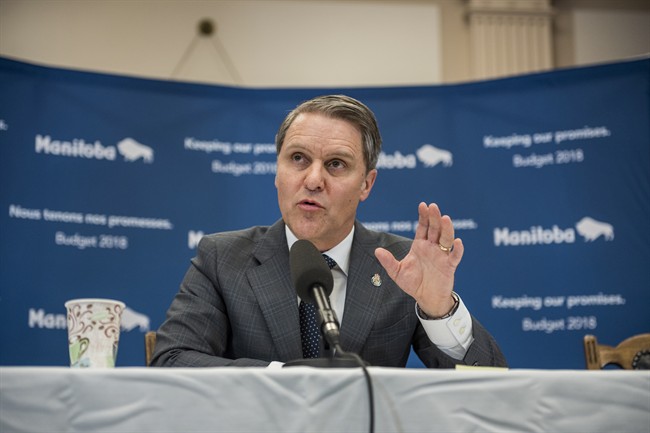 Manitoba Finance Minister Cameron Friesen speaks about the 2018 budget during media lockup at the Manitoba Legislature in Winnipeg on Monday, March 12, 2018. (THE CANADIAN PRESS/David Lipnowski)

WINNIPEG – Manitoba residents will be paying just over five cents more for a litre of gas after the carbon tax kicks in Sept. 1., but the province has promised that all its revenues will eventually be returned to Manitobans through tax reductions.

Premier Brian Pallister said Manitobans have had to learn how to do more with less, and with the upcoming carbon tax and increased hydro rates, he said it’s important to find a balance to make sure money is still ending up on Manitoba families’ tables.

“We are going to lower the tax burden on Manitobans,” he said.

In its budget tabled Monday, the Conservative government said the average household can expect about $240 in extra costs with the carbon tax, which largely come from heating and transportation. The government also outlined tax breaks for households and small businesses which it says will help soften the blow, although the reductions will take four years to be felt.

The carbon tax will also affect natural gas, diesel and propane but marked fuel used in agriculture, mining and forestry will be exempt.

The budget includes a reduction in ambulance fees to $340 from $425, which the Tories promised in the 2016 election. It also introduces a new income tax credit for companies that provide on-site child care of up to $10,000 per child over five years. It’s limited this year to 200 spaces.

The province projects a summary deficit of $521 million — down more than $200 million from the current year — but there was a lot more money to plan with. Equalization payments from Ottawa are set to jump $217 million this year and the carbon tax, once it’s in play, is expected to raise $250 million annually.

Pallister said the budget is a step towards being “Canada’s most improved province” by the end of the Progressive Conservatives’ first term.

At the same time, the government is cutting post-secondary funding by $6 million, or one per cent, which works out to about $8 a month per student. There are also modest increases overall to education and health funding.

The Opposition New Democrats warn there will be front-line cuts in education, health care and other areas. NDP Leader Wab Kinew said the budget is “taking Manitoba in the wrong direction” and will not keep up with inflation.

Manitoba families are being asked to pay more at the pump, Kinew said, while the “big polluters” in the province aren’t paying their share.

Manitoba Liberal Leader Dougald Lamont said the budget will give a tax cut to the richest Manitobans while minimal relief will come to low-income households.

The Association of Manitoba Municipalities said its members will struggle to deal with a funding freeze at last year’s level and the Winnipeg Chamber of Commerce said it’s not pleased that the government is taking in more money from the carbon tax than it’s giving back through other tax cuts.

The future of the film tax credit, considered one of the most generous in the country, is still uncertain following the budget. The government committed to funds this year, but also put together a working group to create a framework for a new tax credit.

The province used the budget to confirm the construction of five new schools, going ahead without private-public partnership models.

Taxes of all kinds big focus of Manitoba budget

— A $25 per-tonne carbon tax to take effect Sept. 1 will add 5.3 cents to a litre of gas and also affect natural gas, diesel and propane prices.

— Marked fuel used in agriculture, mining and forestry will be exempt from the carbon tax.

— New income tax credit for companies that provide on-site child care to be set up. Limited this year to 200 spaces.

— Post-secondary funding to be cut by $6 million, or one per cent.

— Tax on fine-cut tobacco for rolling cigarettes is increasing to 45 cents per gram from 28.5 cents. Other forms of tobacco are unaffected.

Parents seeking child care: The government promises 700 new spaces. It also plans a new tax credit for businesses providing on-site child care, although that will be limited to 200 spaces this year.

The environment: A new conservation fund, starting with $102 million, to be set up to support climate-change initiatives.

Drivers and home owners: Carbon tax to take effect Sept. 1 will add 5.3 cents a litre to gasoline and also increase costs of natural gas and other fuels.

Post-secondary education: Support for universities and colleges is being cut by one per cent, or $6 million.

Some tobacco users: Tax on fine-cut tobacco to increase to 45 cents per gram from 28.5 cents. Cigarettes and other items are not affected.

Credit unions: A lower income-tax rate for credit unions to be phased out over five years, which will cost the financial institutions $15 million annually once fully implemented.