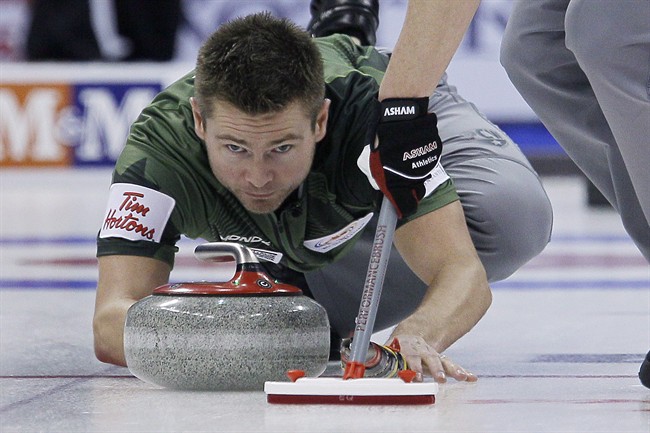 Skip Mike McEwen throws in draw 14 against Kevin Koe at the 2013 Roar Of The Rings championship in Winnipeg on December 6, 2013. (THE CANADIAN PRESS/John Woods)

Mike McEwen’s team from Winnipeg announced on Facebook they will disband after 11 years at the conclusion of this season.

They were the first team to earn a wild-card spot at the Canadian men’s curling championship in its new format. McEwen just missed the playoffs at 7-4.

“We will part ways with fond reflections and we hope continued success for whichever direction each one of us should choose, on or off the ice,” the team said in a statement.

Movement between curling teams is particularly frenetic after a Winter Olympics as teams re-form with a view to qualifying for the next games.

Braeden Moscowy is leaving Reid Carruthers’ Winnipeg team after four years playing vice. Moscowy said on Twitter that he curled on a broken ankle this season.

The Koe team from Calgary that finished fourth at the Olympic Games is looking for a replacement at third. Marc Kennedy is taking a hiatus from competitive curling.

A significant change next season for the Jennifer Jones team that won Olympic gold in 2014 will be Jill Officer serving as the team’s alternate instead of playing second.

Officer will be in the Jones lineup at second for the women’s world championship starting Saturday in North Bay, Ont., but Officer said she’s known for some time she would not play another quadrennial to 2022.

Jocelyn Peterman — who won a Canadian championship in 2016 as Chelsea Carey’s second — will join the Jones team for 2018-19.

Carey, who lost the women’s Olympic trials final with Cathy Overton-Clapham, Peterman and Laine Peters, will skip a completely new team out of Edmonton next season that includes Sarah Wilkes, Dana Ferguson and Rachel Brown.

Curling Canada allowing one member of the team to be from out-of-province for playdowns has made for some new interesting combinations.

Winnipeg’s Kerri Einarson and Edmonton’s Val Sweeting have formed a new team comprised of former skips, with Sweeting serving as Einarson’s vice and Shannon Birchard and Briane Meilleur on the front end.

Tracy Fleury from Sudbury, Ont., will skip Einarson’s former teammates who are in Winnipeg.