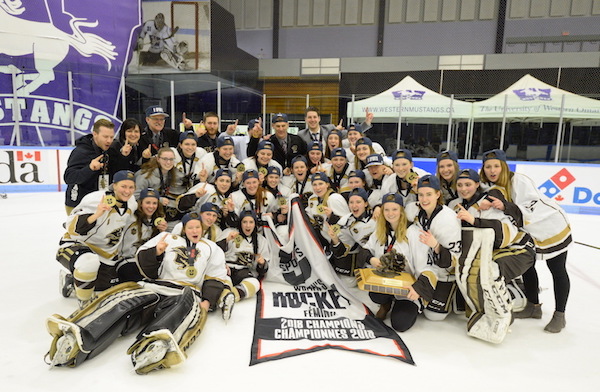 Lauren Taraschuk stopped all 20 shots she faced as Manitoba blanked the Western Mustangs 2-0 on Sunday in the championship.

Lauryn Keen opened the scoring for the Bisons at 18:16 of the second period while on the power play before Venla Hovi added an insurance goal early in the third.

Carmen Lasis stopped 23-of-25 shots for the host Mustangs.

Manitoba went 1 for 5 on the power play while Western failed to score on three chances with the man advantage.

Earlier in the day, Katherine Purchase made 37 saves and Claudia Dubois had two goals and an assist as the Concordia Stingers beat the Saskatchewan Huskies 4-0 for bronze.

Sophie Gagnon and Brigitte Laganiere added a goal and an assist apiece for Concordia.

Jessica Vance turned away 24-of-27 shots for Saskatchewan.