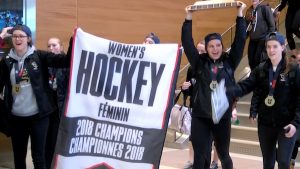 The Manitoba Bison women’s hockey team returns home in Winnipeg on Monday after winning the U Sports national championship for the first time in their team’s history Sunday night in London, Ont. (CHRISD.CA)

WINNIPEG — It’s never happened before, but on Sunday, the Manitoba Bisons slid into the history books. The women’s hockey team hoisted a national championship trophy for the first time in the program’s 21-year history.

Twenty-four hours later, the feeling is still sinking in.

Welcomed home by cheering fans at Winnipeg’s James Richardson International Airport Monday evening, the Herd arrived from London, Ontario with a U Sports national championship to their name.

The Bisons shutout the Western University Mustangs 2-0 at the hands of rookie goaltender Lauren Taraschuk. The Bisons’ two goals were secured by Lauryn Keen and Olympian Venla Hovi.

“The last month has been crazy. It’s been fun. It’s been everything a playoff run like this should be,” said Bisons head coach Jon Rempel.

“This group never felt the pressure… we were the best team there and I think anyone there that watched will tell you that. And they [the team] were rewarded for it.”

The Bisons entered the championship weekend as the No. 1 seed for the first time in their sixth appearance at the nationals.

“Coming back here… it’s just been unbelievable,” said fifth-year captain Caitlin Fyten. “In the moment it was hard to believe, but it felt incredible to raise that trophy up and celebrate with our teammates on the ice.”