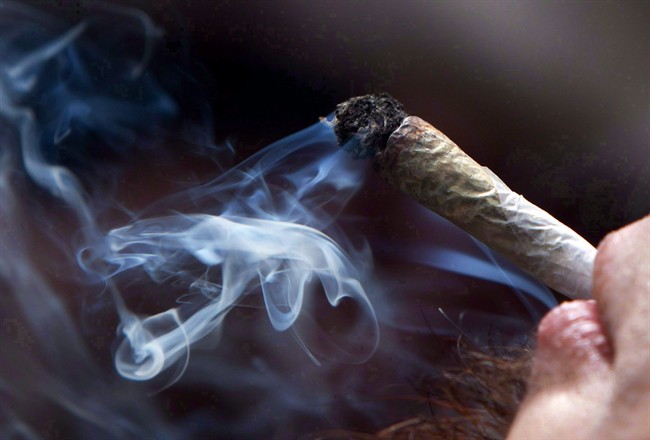 A man smokes a marijuana joint during a rally in downtown Vancouver, B.C., on Wednesday April 20, 2011. (THE CANADIAN PRESS/Darryl Dyck)

WINNIPEG – Even after the federal government legalizes recreational marijuana later this year, Manitobans aren’t likely to have many places where they will be allowed to use it.

The Progressive Conservative government introduced a bill Tuesday that would forbid people from smoking or vaping cannabis in almost all public areas.

Streets, school grounds, parks, beaches, restaurant patios and sports and entertainment venues would all be off limits. Most indoor public places would also be cannabis-free, with exceptions such as designated rooms in palliative care facilities.

Health Minister Kelvin Goertzen said the province wants to ban cannabis in some areas where people can smoke and drink, because the government doesn’t want to “normalize” its use.

“It is uncharted waters for Canada when it comes to the legalization of marijuana,” Goertzen said.

“We believe that starting off by looking at safety as the top priority and going further … than with smoking in some places and alcohol in others is the prudent approach.”

Penalties would be similar to existing ones for smoking tobacco in a forbidden place — starting at $100 to $500 for a first offence and climbing for subsequent infractions.

The bill calls for people to be allowed to light up in their homes and on their property, but tenants might have few options if their landlords forbid cannabis smoking. Goertzen said they could go to a friend’s home.

“It’s difficult to put in place legislation that deals with everybody who may not have property or may not have friends or associates.”

Steven Stairs, a marijuana activist in Winnipeg, said the restrictions amount to prohibition.

“This is not legalization. This is a conservative veil …’protecting the public,’ but meanwhile they’re just following their base, people who don’t want cannabis to be legalized,” Stairs said.

The proposed law also contains new penalties for people who drive under the influence of cannabis.

Fines and licence suspensions would be similar to those already in place for drivers impaired by alcohol, and would start at two nanograms of THC per millilitre of blood.

The province is waiting for the federal government to approve saliva-testing devices to be used by police forces across the country.