Thousands of Manitoba Hydro Customers Left in the Dark 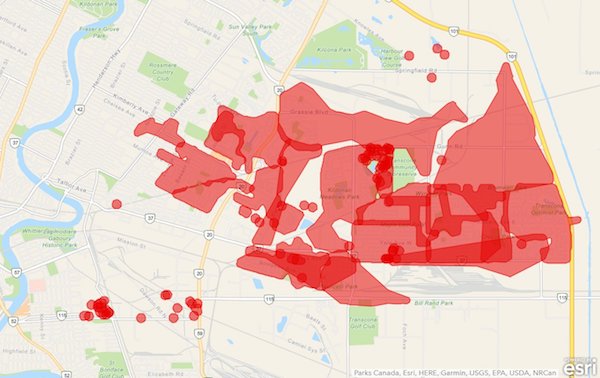 Thousands of Winnipeg residents are being affected by a wide-spread power outage in the Transcona and St. Boniface areas of the city. (MANITOBA HYDRO / TWITTER)

UPDATE: 2:45 p.m. — Power has been restored to all affected customers.

WINNIPEG — Thousands of residents woke up in the dark Wednesday morning after a wide-spread power outage in the eastern part of the city.

Manitoba Hydro tweeted shortly after 6 a.m. that the outage in the Transcona and St. Boniface area was being investigated. They said a pole fire on Dugald Road was to blame and service was slowly being restored.

More than 18,000 customers were originally affected by the outage, which has also caused traffic lights in the area to go out.

As of 7:30 a.m., crews had managed to restore service in the East Kildonan areas. By 9:15 a.m., only about 600 residents remained without power.

Hydro says you can report an outage in your neighbourhood by going to hydro.mb.ca/outage.

There isn’t an estimated timeframe on when power may be restored to all areas.

#mboutage Transcona/St. Boniface area: more and more outage reports in this area. Thank you for letting us know. Right now about 16,400 customers affected in total. Thank you for your patience, and if you haven’t yet, please report your outage here: https://t.co/gbeF0nPIC2 pic.twitter.com/qdLa3NCeWY