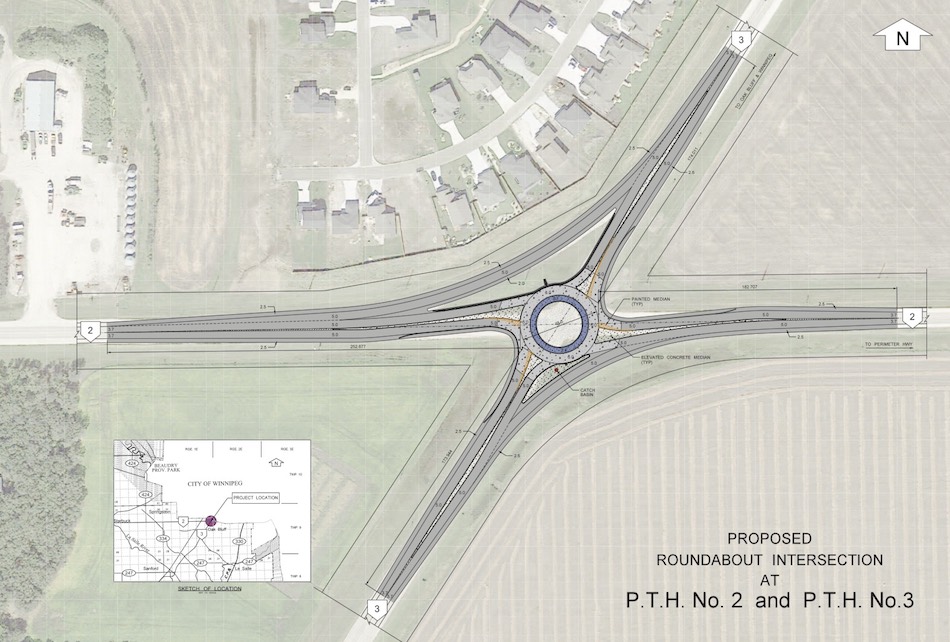 The proposed roundabout on the Perimeter Highway at Highways 2 & 3. (PROVINCE OF MANITOBA)

WINNIPEG — The first roundabout of its kind on a Manitoba highway is said to help better manage traffic flow, reduce collisions and improve driver safety.

The infrastructure announcement made Thursday will target the intersection of Highway 2 and 3, south of Oak Bluff.

“There have been a number of concerns related to this intersection,” said Infrastructure Minister Ron Schuler.

“The volume of traffic has created long lines as well as unsafe merging and crossings. This roundabout is the product of a thorough design process, taking into account speed, driver comfort, future growth and oversized loads.”

The province says approximately 10,000 vehicles drive through the intersection daily. A roundabout is said to reduce fatal collisions by nearly 90 percent and injuries by as much as 76 percent, according to the province.

The project will go to tender this spring and is expected to be complete later this year.

The Manitoba government will also soon hold consultations on how to improve safety on the south Perimeter Highway at uncontrolled access points and medians, where more than 30,000 vehicles travel daily.