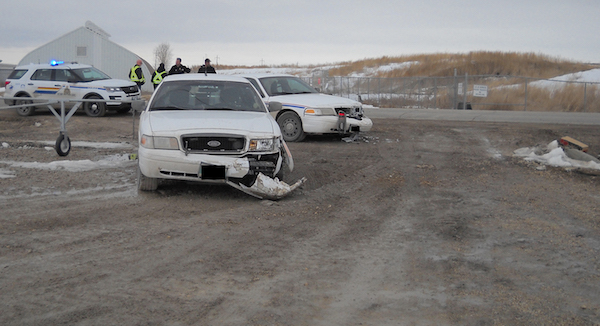 Two smashed by-law vehicles after RCMP say they were rammed by the owner of Samborski Environmental on March 21, 2018. (RCMP HANDOUT)

The owner of Samborski Environmental is facing charges after police say he rammed two by-law enforcement vehicles with a front-end loader.

The composting business has been embroiled in a contentious relationship with the province and RM of MacDonald for years over the smell of its operation and whether it can legally operate at its Brady Road site.

RCMP say two by-law officers were attempted to seize equipment from Samborski Environmental on March 21 and had partially blocked the driveway of the business to do so. That’s when a front-end loader was used to ram both vehicles before it took off erratically east on the Perimeter Highway.

One of the officers suffered minor injuries while trying to exit out of the passenger side door while the vehicle was being rammed. The other officer wasn’t injured.

Winnipeg police caught up to the front-end loader as it exited onto Pembina Highway near Bishop Grandin Boulevard.

Leonard Samborski, 65, of Winnipeg was taken into custody.

He was released to appear in court at a later date.