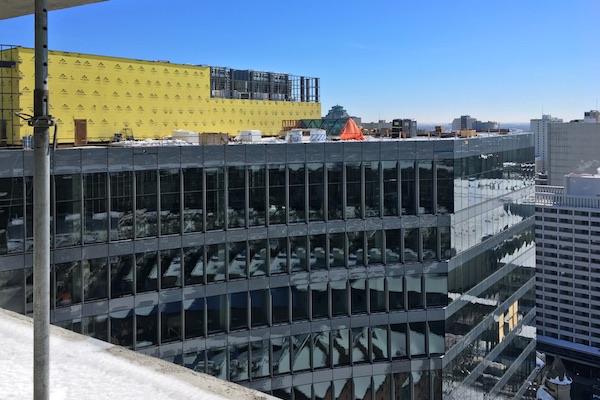 There’s a famous saying that when one door closes, another opens.

In the case of downtown Winnipeg’s current real estate scene, numerous doors are closing in some of the city’s traditionally popular high-rise office towers as brand new ones prepare to open to tenants in True North Square’s 17-storey building on Hargrave Street in June.

It’s been almost 30 years since a project like this has graced the city’s skyline. The last private-sector development was 201 Portage Avenue (formerly TD Centre, CanWest Place and CanWest Global Place).

Companies such as law firm Thompson Dorfman Sweatman (TDS) are about to vacate the 33-storey building with the large circular courtyard that opened on the corner of Portage and Main in 1991.

However, not all tenants are looking to bail on Winnipeg’s tallest building for new space in True North Square or anywhere else at this point. 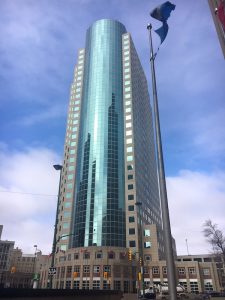 201 Portage at the corner of Portage Avenue and Main Street. (MICHELLE BAILEY / CHRISD.CA)

Now, with its lease on the verge of ending, officials at Global Winnipeg say they are giving serious consideration to staying put and taking up even more space at 201 Portage.

That expansion would involve moving news talk radio’s 680 CJOB out of its building in Polo Park on Jack Blick Avenue, relocating all staff, including on-air talent from Power 97 and Peggy @ 99.1, to occupy real estate at Portage and Main.

When the 70-year-old AM radio stations parent company, Corus Entertainment, purchased Shaw in 2016, they soon digitally integrated CJOB and Global under one internet domain, that being GlobalNews.ca. 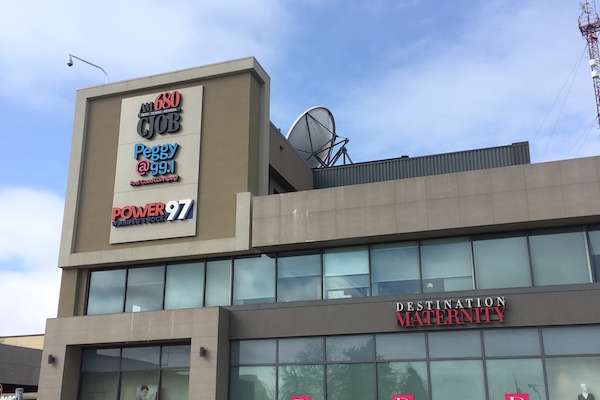 Merging the physical operations appears to be in the works, according to Williamson.

“Corus is considering bringing all their local brands under one roof,” he confirmed.

As for whether or not True North Sports + Entertainment staff will relocate from its current digs to enjoy that new office smell in the building across the street, such a move does not appear to be in the cards for now.

“Current plans are to remain in the Powerhouse Building, which adjoins Bell MTS Place both above and below grade.”