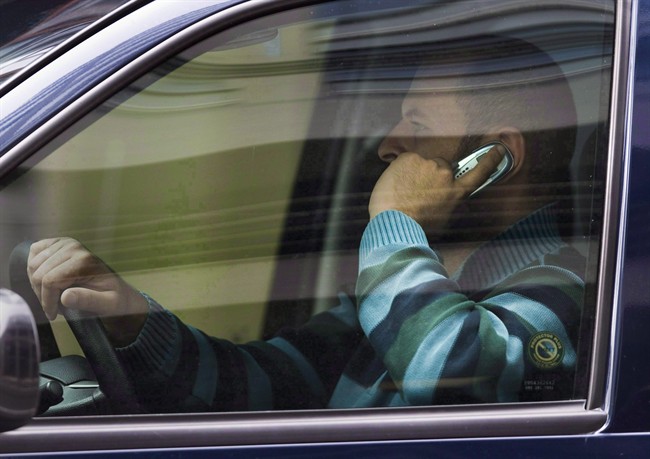 A driver talks on his cell phone while driving in Ottawa, Wednesday September 30, 2009. (THE CANADIAN PRESS/Sean Kilpatrick)

Across rural Manitoba, residents are concerned about safety. They’re concerned about the ability of the RCMP and local police forces to effectively tackle issues such as property crimes and illegal drugs, in the face of stretched budgets and competing demands on their time. They’re looking for support from the government. The provincial government has introduced new legislation aimed a keeping us safe, but not in the way that many Manitobans, especially those in rural areas, are looking for. Last week, Bill 17 received a first reading.

This bill takes existing distracted driving regulations and adds more penalties. When passed, it will mean that anyone caught using a hand-held communication device while driving will not only face fines and demerits, but also a roadside license suspension — three days for the first offence and seven days for each subsequent one.

Despite Infrastructure Minister Ron Schuler hinting otherwise, the suspension only applies to the use of hand-held electronic devices and not the full range of distracting practices, such as grooming and eating. However, the Highway Traffic Act has a broad definition for the “use” of a hand-held electronic device, it even includes holding the device in a position in which it may be used. The only permitted use is a cell phone, used as a telephone, in a hands-free manner.

But apparently devices aren’t distracting for everyone. The Highway Traffic Act allows police, fire and ambulance personnel to use them while carrying out their duties. Additionally, the law doesn’t apply to CB radios, family band radios or mobile data terminals used for business-related communications, such as dispatch, that aren’t held in the driver’s hand when moving. The government has made the punishment for using hand-held devices as serious as that for drinking and driving, but not applied it to everyone.

We all know that distracted driving is unsafe; MPI statistics show that it is dangerous and sometimes deadly. In 2016, 11,093 drivers were involved in collisions due to distracted driving. In those collisions, 1,839 Manitobans were injured and 102 experienced serious or fatal injuries. Of all of the accidents in 2016, one in three deaths and one in five serious injuries on Manitoba roads could be attributed to a distracted driver. We also know that people haven’t been taking the existing legislation as seriously as they should; in 2016, over 5,000 drivers were convicted of using a hand-held device while driving.

The problem is that “distracted driving” encompasses more activities than just using hand-held electronics and while they might net you a ticket, especially if you’re involved in an accident, none of them result in such harsh penalties, even if they are as distracting. For example, MPI data shows that a driver is four times more likely to be in a crash if they are talking on the phone while driving, even while using a legal hands-free device.

Distracted driving is dangerous and I’m in favour of safer roads, but my biggest problem with this legislation is that the suspension can’t be appealed. While police can prove other forms of impairment through breathalyzers or blood tests, there is no such test for the use of hand-held electronics. Am I looking at a phone in my lap or the cruise control setting on my steering wheel? Am I resting my head on my hand or holding a phone? It comes down to he said-she said, with the driver coming out on the losing end — with no recourse.

The use of hand-held electronics while driving is dangerous, but is it more or less dangerous than the other illegal practices you’ll see on Manitoba roads? It feels like the government has gone for low-hanging fruit, with innocent Manitobans getting a rotten deal.