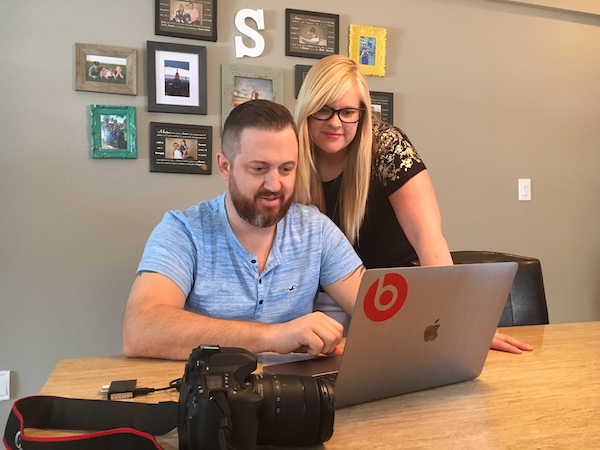 Lorraine and Greg take a quiet moment as their kids play to work on their YouTube channel. (MICHELLE BAILEY / CHRISD.CA)

On July 7, 2017, Lorraine Nickel filed her final story with Global Winnipeg. It was about vehicle thefts from a local car dealership.

At the end of that summer day, the 34-year-old said her heartfelt goodbyes to colleagues at a local news outlet where she spent 10 of her 14 years in journalism, a profession Nickel adored.

But the thrill of covering high-profile court cases and chasing down the news of the day was no match for spending more time with her four-year-old son, Cruz, and two-year-old daughter, Eden.

Leaving her young family behind was something she just didn’t want to do anymore after returning to work following her second maternity leave.

“I went back and I just couldn’t even make it to the six-month point,” she said. “I knew that I had to put in at least that much time without having to pay anything back to the government for my mat leave, but the thought of my two kids being in daycare all summer and going forward just didn’t sit well with me.”

With the support of Nickel’s husband of six years, 37-year-old Greg Stuart, they figured out a game plan as to how they would make her not going to work anymore… work.

“He (Greg) looked at me one day and asked if I would want to stay home? I can’t do that, I thought. I’m a working mom!”

“And then he pointed out he was able to do his job as an operations manager with a wireless company from home, so why couldn’t I find something to do from home too?” 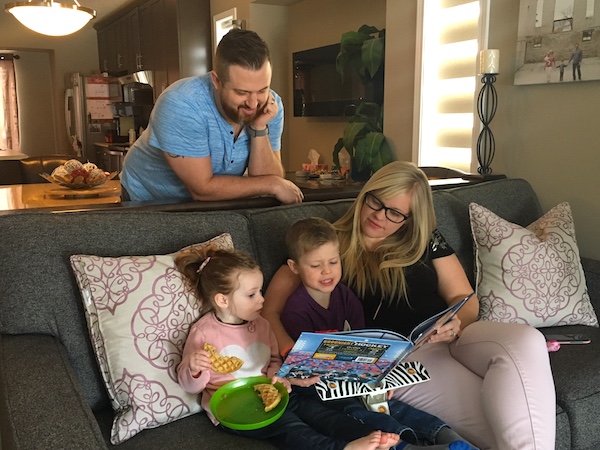 Greg, Lorraine, Eden and Cruz take a minute to wrap up breakfast and read before the full day begins. (MICHELLE BAILEY / CHRISD.CA)

Having grown up in Vita, Manitoba with a mom who stayed home with the kids while helping run the family dairy farm, Nickel quickly realized she could do something similar.

So the couple, using Stuart’s background in financial planning, did something akin to a retirement plan. The next step was for Nickel to break the news to her supervisor. That took almost a month for her to do.

“Going in to tell my boss that I was quitting was one of the hardest decisions of my life,” said Nickel, looking down at her dining room table with emotion. “I had to Google how to write a resignation letter. It was actually scary. But Jon (Lovlin, Global Winnipeg’s managing editor) respected my decision to put down the microphone, and not one day goes by that I regret doing it.”

Today, Stuart’s love for making home videos and documenting moments, combined with Nickel’s eye for editing and gift for storytelling using moving pictures has blossomed into a YouTube channel. 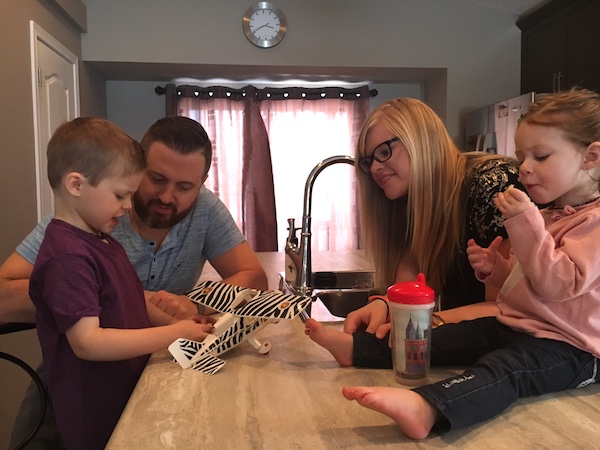 Cruz loves planes and explains the mechanics of his “bird” to Greg, Lorraine and Eden. (MICHELLE BAILEY / CHRISD.CA)

“My grandpa was a techie and always had a video camera going,” said Stuart. “He recorded so many moments from my years growing up and to be able to re-live my childhood by watching them is something I want my kids to have. YouTube is our way of making a video diary of our family and friends for our family and friends and anyone else who wants to see it.”

Nickel also toyed with the idea of vlogging (like blogging, but using her skills having worked in television by being on camera) about being a mom and life with young kids, but decided to do something different with her many years of on-air and social media experience. 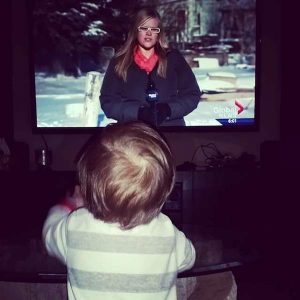 “I now help small businesses do their social media through something we’ve called Inspired Creative Media, which I started just before leaving my full-time job. I really enjoy doing it and, again, I get to do it from home as my kids play, eat or nap. I love it,” she says, as Eden rips by, pushing a tiny doll stroller while wearing an Easter bunny hat made out of construction paper.

Nickel says while she was humbled when viewers recognized her when she was in public and perhaps commented on her latest pair of the nifty eyewear she donned during her years in broadcast television, she really appreciates one compliment in particular that she gets now.