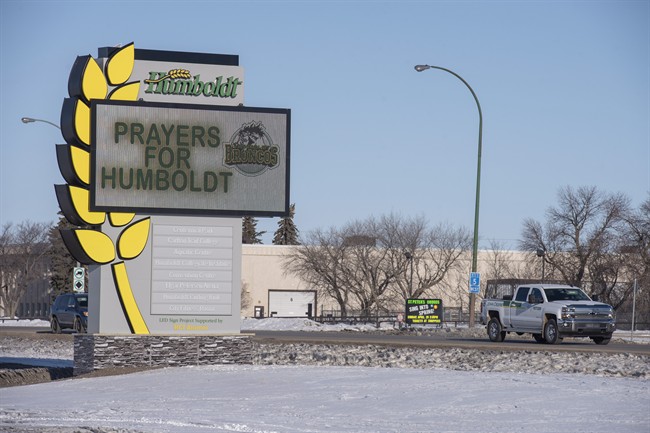 The welcome sign is shown in Humboldt, Sask., Saturday, April 7, 2018. RCMP say 15 people are dead and 14 people were injured Friday after a truck collided with a bus carrying a junior hockey team to a playoff game in northeastern Saskatchewan. Police say there were 28 people including the driver on board the Humboldt Broncos bus when the crash occurred at around 5 p.m. on Highway 35 north of Tisdale. (THE CANADIAN PRESS/Liam Richards)

SASKATOON – Hassan Masri once cared for airstrike victims in Syria’s civil war, but that didn’t hardened him to the injuries he and other emergency staff at Saskatoon’s Royal University Hospital saw Friday night after a horrific bus crash that killed 15 people.

That designation means extra staff and extra machines are called in. Teams are organized to be assigned to each patient.

Everyone worked through the night treating 15 patients from a collision between a bus carrying the Humboldt Broncos junior hockey team and a transport truck in eastern Saskatchewan. One of those patients later died, the RCMP said Saturday.

But after hours and hours of working non-stop, Masri was able to look up and remember he’s human.

“You see the mothers who are trying to cuddle their 19-year-old or 22-year-old in a stretcher, and the little sisters of these patients and the older brothers, and you start to hear the stories, and the pictures that they’re showing you of their loved ones — that’s when the shock and reality starts to really hit,” Masri told The Canadian Press Saturday.

Masri said he hadn’t heard the news about the crash when he showed up for his 12-hour shift as an intensive care doctor at the hospital at 8 p.m. Friday. He headed to the emergency department to see what was going on, and saw a massive number of physicians, surgeons, neurosurgeons, residents, nurses and other personnel.

Each patient would have their own team with an ER doctor, a surgeon, a resident, a respiratory therapist, and a nurse, he said.

They had just under two hours to get ready.

“People could relate because a lot of people have kids that play on hockey teams that travel from town to town so this was personal.”

Masri, whose parents are from Syria, volunteered with other doctors for two weeks in the war-torn country in 2011. That experience likely helped prepare him for the bus crash, he said. He learned to control his emotions and focus on the task at hand.

But while the severity of the injuries may have been similar, Masri said the resources available to treat the casualties were much, much better than what he had in Syria. Masri said the Saskatchewan Health Authority and hospital administration “played a huge role” in making sure everything went smoothly.

“There wasn’t even a single hiccup yesterday that I could think of in the whole process.”

Masri was trying to sleep Saturday but the experience kept replaying in his mind.

“I’ll go back to caring for the same patients who obviously will have a long road ahead, and will need me to be fresh and ready to take care of them.”