Home » The Canadian Press » At This Museum, Even the Building Structure is About a Journey to Hope

At This Museum, Even the Building Structure is About a Journey to Hope 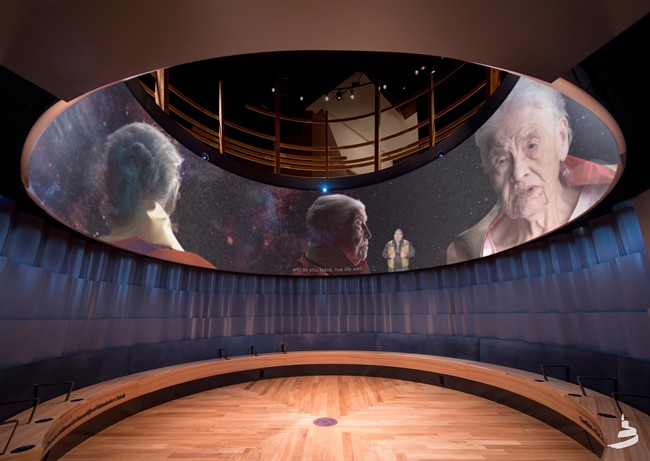 WINNIPEG – The young men and women in the photograph are smiling broadly. Some are laughing. One is playing an accordion. They’re clearly having a great time.

The dozen people looking toward the camera could be any group of people having boisterous fun. But their uniforms convey a darker truth — they are Nazi soldiers and support staff from the Auschwitz concentration camp.

The photograph, at roughly the halfway mark of an afternoon-long walk through the Canadian Museum For Human Rights, is a good example of how the museum looks at its subject matter. Whether condemning the horrific or celebrating the good, the stories told in this museum often revolve around how ordinary people played a part.

One exhibit includes the prom dress of Mareshia Rucker and the tuxedo of Brandon Davis, two of the students who organized the first integrated prom at high school in Georgia, U.S., in 2013. Another shows a video of a 13-year-old Syrian refugee describing his harrowing journey across the Mediterranean.

An alcove that focuses on Canada’s residential schools features two classroom chairs and videos of former students telling of the abuse and separation from family they endured.

Trying to encompass centuries of human rights triumphs and tragedies in one building is a challenge. Looking at themes, instead of trying to list every event or issue, is the approach the museum takes.

“One of the first things we do is think about what are those take-away messages that we want visitors to leave with,” says Jodi Giesbrecht, the museum’s director of research.

“If we want people to learn about, for example, what reconciliation means to (Indigenous people) … that helps us to think about (whether) that story is best expressed through a personal story. Is there an artifact that really represents that issue? Is it a combination of technology and artifacts?”

Many artifacts — sometimes on temporary loan from other institutions — have been featured at the museum since it opened in 2014. They include a ballot box used in the 1994 South African election won by Nelson Mandela, and the bloodied school uniform worn by Malala Yousafzai when she was shot while attending school in Pakistan.

Technology plays a big role as well. In some galleries, visitors can use touch-screen panels to explore different issues. In one area, you can simply point toward a vertical screen and choose from different stories. In other areas, life-size projections of people seem to walk toward you and tell their story.

Doug McArthur, a Winnipeg resident who recently took his son on a tour, said he was impressed with how the museum took a broad topic and told it though individual stories. The museum isn’t all about atrocities, he noted, and focuses a lot on progress that has been made.

“One thing that wove through a lot of the stories is that there were so many trying times that people had gone through where they were fighting for their rights, and how that changed the law for the future,” McArthur said.

The 24,000 square-metre building itself reflects a journey from darkness to light. You enter slightly below ground level into a dark, cavernous gallery. As you make your way through the museum, you walk slowly but steadily upward along ramps. Each gallery is a bit brighter and you end at the Tower of Hope — a glass structure with views in all directions, bathing in prairie sunshine and rising 100 metres above the city.

The walkways and ramps between galleries are sometimes long and at odd angles, giving you time to process what you have just seen. Some ramps are brightly lit against the darkness of the lower galleries.

Designed by American architect Antoine Predock, the building’s exterior resembles the wings of a dove wrapped around a mountain of limestone. The glass Tower of Hope is made to look as if it is still a work in progress — a reminder that the evolution of human rights is ongoing.

— The Canadian Museum For Human Rights is located at The Forks in the southeast corner of downtown Winnipeg.

— Daily admission is $16 for adults 18-64 years of age. There are discounted rates for seniors, students and youths.

— There is free admission after 5 p.m. on the first Wednesday of every month.