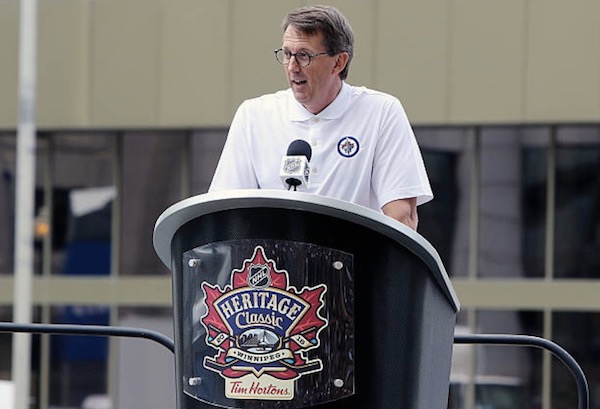 Winnipeg Jets Executive Chairman and Governor Mark Chipman speaks during the 2016 NHL Heritage Classic press conference held at the Outdoor Plaza at the corner of Portage and Main on August 5, 2016 in Winnipeg, Manitoba, Canada. (JONATHAN KOZUB / NHLI VIA GETTY IMAGES)

The peer-to-peer network of successful business leaders is marking 30 years and has been encouraging local chapters to invite leading public fitures and entrepreneurs to share their knowledge and insights with the EO community.

“Mark Chipman’s story is an inspiration for entrepreneurs and sports enthusiasts alike. His determination brought the Winnipeg Jets back and his passion for hockey continues to drive him even today. We are honoured that he accepted our invitation to become EO Winnipeg’s Chapter Patron,” said EO Winnipeg president Dinis Prazeres.

Chipman also serves as the chairman of the board of True North Sports + Entertainment. He’s been responsible for relocation the former Minnesota Moose hockey club to Winnipeg in 1996, was an active member of the AHL’s executive committee and later led the team that developed the MTS Centre, the MTS Iceplex along with business partner David Thomson. In addition, he was a key part in the successful return of the Winnipeg Jets from Atlanta in 2011.