By Bill Brioux, The Canadian Press 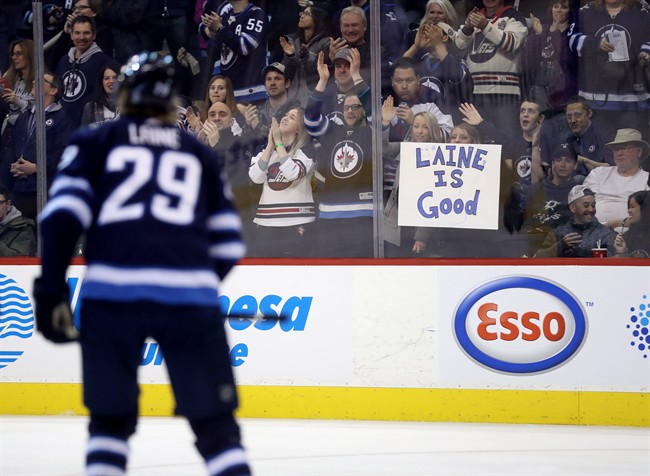 A fan holds a sign referencing his Players Tribune quote ‘Winnipeg is Good’ as Winnipeg Jets’ Patrik Laine (29) skates off the ice after scoring during second period NHL hockey action against the Dallas Stars, in Winnipeg, Sunday, March 18, 2018. (THE CANADIAN PRESS/Trevor Hagan)

It has been a quarter-century since a Canadian team has captured the Stanley Cup. Two teams will try to break that string starting this week when the Toronto Maple Leafs and the Winnipeg Jets join 14 American-based teams in their quest for the NHL crown.

Scott Moore, president of Sportsnet and NHL properties at Rogers Media, has his fingers crossed that at least one of the Canadian teams goes deep into the playoffs.

“We have two legitimate contenders that both play in Canada,” said Moore, who led the broadcast team in 2013 that acquired the rights to all national NHL games in a 12-year, $5.2-billion deal.

So far, that deal has paid uneven dividends.

Rogers was upended in 2016 when no Canadian team made the playoffs. Steep losses in viewership and ad revenue followed.

Despite the drop from five clubs to two this spring, Moore said they are the right two to keep ratings high, especially the team in Canada’s largest TV market, the rejuvenated Maple Leafs.

Ad sales for the opening round of the playoffs are pacing ahead of last season, said Moore.

“A lot of that gets driven by the fact so much media buying gets done by the agency head offices in Toronto,” he said. “When there’s buzz about hockey in Toronto, it helps the entire league.”

The Leafs closed their season Saturday with a franchise-best 105 points and will open the post-season in Boston on Thursday. Their fan base has responded to their success this season. Leafs games on Rogers’ Saturday showcase, “Hockey Night in Canada” (airing on CBC), averaged close to 1.5 million viewers this season, up 20 per cent from the season before.

Jets games on “Hockey Night in Canada” are up five per cent year-to-year, a small lift considering the dramatic turn in fortunes for the club, which opens the post-season Wednesday against the Wild.

Moore hopes that Winnipeg’s reputation as one of the most exciting places to watch an NHL game translates into added viewers. He’s also pulling for defending champion Pittsburgh and the NHL’s newest franchise, the Vegas Golden Knights, to provide compelling storylines these playoffs.

The Knights’ Cinderella story might also help some fans get over the fact that few Original Six teams made the playoffs this year, with Montreal, Chicago, Detroit and the New York Rangers all on the sidelines. Moore acknowledged that those teams still “tend to have a little more cache” during in-season broadcasts, but this year, “would you rather have the Rangers or would you rather have Vegas?”

Ratings for “Hockey Night in Canada” broadcasts on CBC were flat this season, up one per cent from the year before with an average audience for the 7 p.m. ET games, at 1.8 million viewers.

Moore is most buoyed by a 10 per cent rise in Rogers NHL Live viewership. Even better for the media company’s bottom line, the digital streaming service saw a 24 per cent growth in subscriptions year over year.

“The past two months, we’ve been No. 1 in the (digital) category,” said Moore, who maintains that Sportsnet is the top sports TV brand in Canada, pulling ahead in TV and radio and now digital viewership over rival TSN.

Bell Media, however, contends that TSN is Canada’s most-watched specialty channel, beating Sportsnet for five of the past six months thanks to coverage of everything from the 2017 Grey Cup to the world junior hockey championship and the Olympics.

Moore expects Sportsnet to seize the lead back through the spring playoff run.

“I’m proud that since we took over the contract four years ago that every single minute of every single playoff game has been shown on a national platform,” he said. “That never happened before and that doesn’t happen in the U.S.”

The first round of the Stanley Cup playoffs begins Wednesday. All broadcasts will be carried live throughout the playoffs by Sportsnet and CBC.

— Bill Brioux is a freelance TV columnist based in Brampton, Ont.

← Previous: At This Museum, Even the Building Structure is About a Journey to Hope Next: Manitoba Ice Cream Maker Cornell Creme Closing Down →
Tags: Hockey | NHL | Rogers | Television | Winnipeg Jets