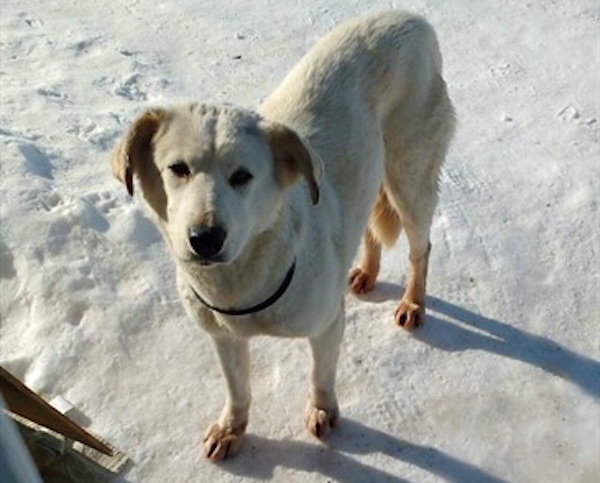 A two-year-old golden Labrador mix, named Greta, is seen in this undated handout photo. A rescue dog was shot and killed at Winnipeg’s airport this week after it escaped following a flight from northern Manitoba. (THE CANADIAN PRESS/HO, Manitoba Mutts Dog Rescue)

WINNIPEG – A frightened rescue dog that escaped from a plane and scampered onto a runway at Winnipeg’s airport was shot dead by wildlife control officers after officials feared the pooch might cause an accident.

Airport spokesman Tyler MacAfee says the dog ran onto a runway and forced the crew of a WestJet flight from Las Vegas to abort a landing attempt.

MacAfee says the dog started to run back toward the runway a second time and, despite efforts by two officers to coax Greta in, the dog could not be corralled and was shot to avoid another conflict with an aircraft.

Rebecca Norman, a Manitoba Mutts director, says Greta had been placed in a standard plastic kennel, but it appears she chewed through the side and jumped from the plane when the door opened.

“It was a bit of a shock for all parties involved,” said Norman. “I think everyone did the best that they could, given the scenario. The outcome was as it should be.”

Greta was considered a community dog that ran loose, although she wasn’t feral and was still approachable, said Norman.

“Dogs don’t take well to taking trips on airplanes. Any dog would be quite fearful after a flight.”

Norman said a standard metal kennel had been provided for Greta’s transport, but a volunteer in Shamattawa decided the weight was too heavy to load onto a truck, so the dog was left in the plastic kennel.

Norman said the rescue group has flown many dogs in plastic carriers before.

A member of a foster family that would have taken Greta before possible placement in a permanent home was waiting at the airport.

“They were very upset. This was their first foster dog with us so it was pretty traumatizing. Thankfully, she was able to take another dog that was on the flight,” said Norman.

MacAfee said pets have escaped from their crates before, but this is the first time the airport had to shoot an animal.

He said they’ve looked at the option of using a tranquillizer gun.

“My understanding is that there are no airports in Canada which use that technique, but … if it’s practical and makes sense and works then, absolutely, we would look at it as an option.”

Norman said it’s wonderful the airport has offered to meet with her organization, but she’s not sure much will change “in terms of protocol.”

“Tranquilizer darts take quite a long time to work and it’s a guessing game on how much the dog weighs and how much medication to give.”

There was no immediate reply from Perimeter to a request for comment.

Manitoba Mutts takes in about 500 dogs a year and has been working with Perimeter for seven years to transport animals from northern communities.

— By Ken Trimble in Edmonton