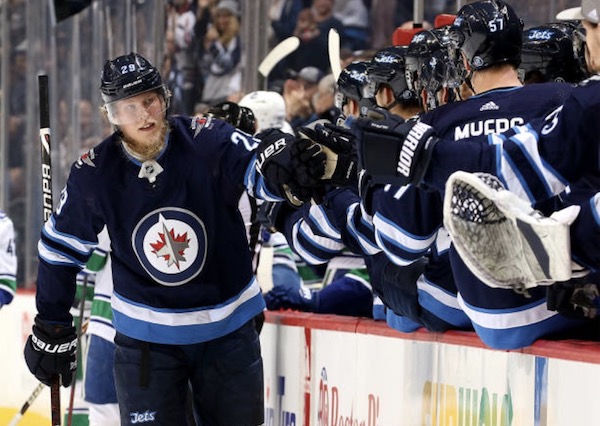 Patrik Laine #29 of the Winnipeg Jets celebrates his first-period goal against the Vancouver Canucks with teammates at the bench at the Bell MTS Place on January 21, 2018 in Winnipeg, Manitoba, Canada. (Photo by Jonathan Kozub/NHLI via Getty Images) 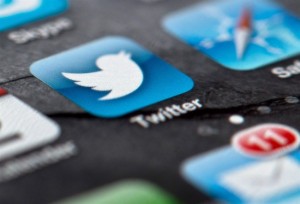 In this Feb. 2, 2013, file photo, a smartphone display shows the Twitter logo in Berlin, Germany. (THE CANADIAN PRESS/AP, Soeren Stache)

With 44 goals in 82 games this season, Winnipeg Jets right winger Patrik Laine isn’t only making moves on the ice, but also online.

Exclusive data provided to ChrisD.ca from Twitter Canada shows the 19-year-old Finnish phenom was the most-mentioned Jets player on the platform during the 2017-18 season.

If you break that down between first half, second half and full season Twitter mentions… you guessed it, Laine still comes out on top. Is there anything this kid can’t accomplish?

Capturing some of the spotlight during the second half of the NHL season was recently-acquired Jets forward Paul Stastny, who signed with Winnipeg from St. Louis on February 26. Twitter Canada says Stastny was the second most-mentioned player heading into the team’s post-season.

Capturing the Twitter title for the most team mentions throughout the league were the Vegas Golden Knights, with Pittsburgh Penguins’ captain Sidney Crosby leading the league in most individual player mentions, according to Twitter’s NHL recap.

Joining the platform late this season is an official @StanleyCup Twitter account, which began typing away with its own custom emoji on April 9.

The Jets welcome the Minnesota Wild to Bell MTS Place tonight at 6 p.m. in the first round of the NHL playoffs. Game two is Friday at 6:30 p.m.