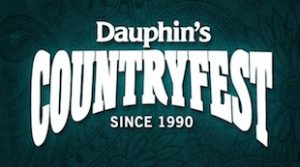 The complete lineup for this year’s Dauphin’s Countryfest is now out.

Canada’s longest-running country music festival is June 28 to July 1 and doesn’t just include artists from the country genre.

“We’ve got a great mix of country, rock, blues and roots, for a well-rounded music weekend, and something for everyone,” said Countryfest promoter Rob Waloschuk.

Eric Church, Florida Georgia Line and Paul Brandt are just three of the previously released acts to appear this summer.

A limited number of weekend passes, VIP tickets, camping and day passes remain for the 29th annual festival. Tickets can be purchased online at countryfest.ca, by calling 1-800-361-7300, or in-person at the Dauphin’s Countryfest office (28 2nd Avenue NE in Dauphin). Ticket prices increase on May 1.