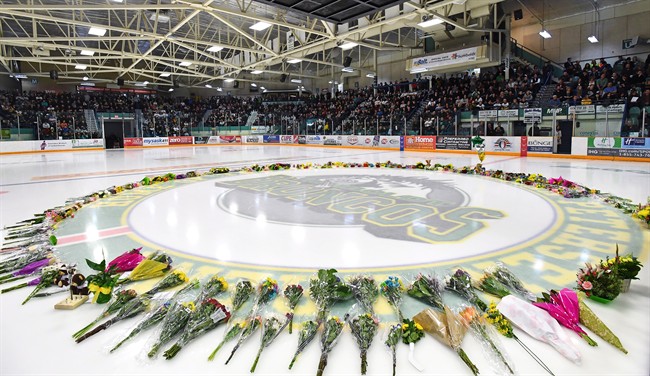 Flowers lie at centre ice as people gather for a vigil at the Elgar Petersen Arena, home of the Humboldt Broncos, to honour the victims of a fatal bus accident in Humboldt, Sask. on Sunday, April 8, 2018. (THE CANADIAN PRESS/Jonathan Hayward)

Sixteen people lost their lives when the bus they were travelling on collided with a semi truck on April 6.

“Since the tragic story broke, Manitobans have been signing up online to donate their organs and tissues to others in need,” said Health Minister Kelvin Goertzen.

“In just one week, more than 4,500 people have signed up. Now we hope we can keep that generosity going and have 30,000 Manitobans registered by April 30.”

Officials say since the registry was launched in 2012, the organ donation registry website has never seen traffic like it has in the past week.

“Canadians and people from all around the world have been affected by this immense loss of life,” said Dr. Faisal Siddiqui, physician with Transplant Manitoba — Gift of Life.

A GoFundMe campaign for survivors and the families of those lost has reached nearly $11 million in the past seven days.

To become an organ and tissue donor, visit SignUpForLife.ca.