Jets Expect Loud, Frenzied Crowd as Wild Try to Dig Out of 0-2 Hole 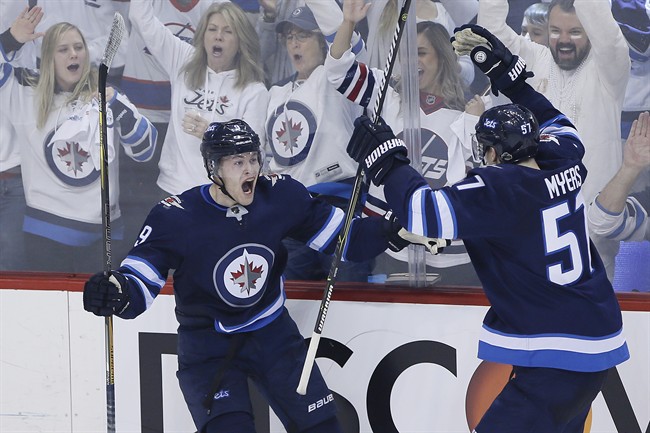 WINNIPEG – The Winnipeg Jets got a boost from their frenzied fans over their two victories at home over Minnesota. Jets forward Paul Stastny is expecting another raucous crowd now that the series is moving south of the border.

Winnipeg opened the best-of-seven first-round series with a 3-2 win Wednesday night and followed that with a 4-1 victory on Friday. Game 3 is set for Sunday at Xcel Energy Center.

“Minnesota, it’s almost like a Canadian market there,” said Stastny, who had a goal on Friday night. “It’s a hockey state for sure. I’ve played there a bunch of times and that building gets loud. I told the guys here I think home playoff games are fun, but I think road playoff games are way better, especially when you’re facing a crowd like that.

“Nothing better than winning on the road, so I think we know it’s going to be a tough atmosphere, a hostile environment.”

Acquired from the St. Louis Blues before the trade deadline, Stastny is competing in his fifth career playoff series against the Wild. The previous four were when he played for Colorado and St. Louis, including the Blues’ first-round victory last season.

Head coach Paul Maurice said he expects the Wild will get into their comfort zone at home and his players have to be ready to handle the loud crowd.

Minnesota had a 27-6-8 home record in the regular season, with its six regulation losses the fewest in the league. Winnipeg went 32-7-2 on home ice.

The Jets won the regular-season series 3-1. Their only loss was at Xcel Energy Center, which holds about 20,000 fans.

“In that building, the puck crosses the blue line and the crowd is expecting the chance (to score) … it just needs to get near the net and they get pretty excited,” Maurice said Saturday before the Jets departed for Minnesota.

“It’s all part of the learning process for the new guys, and the veteran guys who’ve had that experience before can help out.”

It wasn’t immediately clear when the Jets would arrive in the Minneapolis-St. Paul region. The area was under a blizzard warning and the Jets’ afternoon flight had to be rerouted to Duluth, the team said on Twitter.

The Wild returned home after Friday’s game and practised Saturday.

“By no means is it, ‘Oh we’re at home. It’s a free couple wins,'” Minnesota forward Zach Parise told reporters after the skate. “(The Jets) are playing really well and we’re going to have to play much better.”

Game 4 was scheduled for Tuesday.

Winnipeg has outshot Minnesota 84-37 over the first two games of the series. The Jets also cranked up their physical play Friday, outhitting the visitors 38-23.

This is the first playoff series for 11 players on the Jets’ roster. The team’s only post-season appearance since relocating to Winnipeg from Atlanta in 2011 was a sweep at the hands of Anaheim in 2015.

“They’re coming in with confidence and that’s all you can ask from the young guys,” Myers said. “They’ve been unreal for us throughout the first two games here.”

Second-year defenceman Josh Morrissey admitted there are nerves, but mostly before the puck drops.

According to the Elias Sports Bureau, the team that wins the first two games at home in a best-of-seven series goes on to win the series 88.7 per cent of the time. But Myers knows how quickly momentum can shift.

“(Minnesota) did very good on home ice as we did, so we’re certainly going to have to be ready,” Myers said. “We know the series is (far) from over and we’re just taking it one game at a time.”