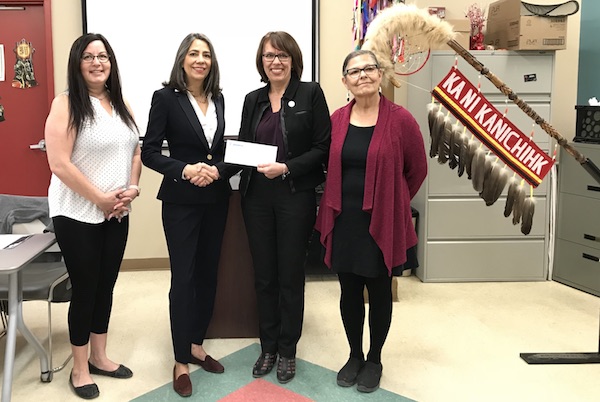 WINNIPEG — A community organization that provides culturally safe programs and services to Winnipeg’s Indigenous community has received a $50,000 contribution towards its capital expansion project.

The Wawanesa Mutual Insurance Company donated $50,000 on Monday towards Ka Ni Kanichihk‘s $5 million goal to triple the size of its daycare centre from 16 to 46 spaces.

“We are thrilled to be the first company to commit to their capital expansion project and partner with an Indigenous organization that is creating better, stronger, and healthier neighbourhoods,” said Jodi Carradice, senior vice-president and chief human resources officer, Wawanesa Insurance.

Executive director Leslie Spillett says Ka Ni Kanichihk expects to raise the remaining funds in 2018-19, with construction anticipated to begin in spring 2019. About $2.54 million has been raised to date.

“Investment in Indigenous-led and prevention-focused development is critical to decreasing and eliminating the social exclusion that results in so much tragedy in this city,” she said.