By Brian Hall, The Canadian Press 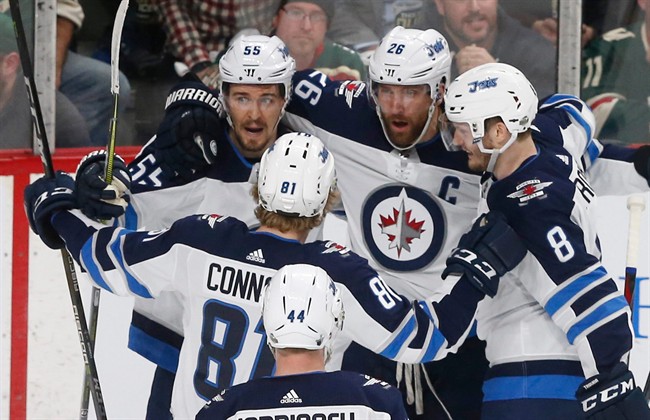 ST. PAUL, Minn. – Jets goaltender Connor Hellebuyck found out he was one of three finalists for the Vezina Trophy for the NHL’s top netminder just hours before the puck dropped on Game 4 of Winnipeg’s series with the Minnesota Wild.

Already eager to prove he could come back strong after giving up six goals and being pulled in Game 3, Hellebuyck had a little more inspiration to face Minnesota.

He made 30 saves for his first career playoff shutout and Mark Scheifele scored twice as Winnipeg beat the Wild 2-0 on Tuesday night to take a 3-1 series lead in the Stanley Cup playoffs.

“It definitely added a little more hop to my step,” Hellebuyck said. “I don’t know if it changed my game too much because I prepare the same way, and I do the same things every day.”

Another tense affair between the two division rivals, who are just a 90-minute flight apart, was heightened by the Jets’ crowd in attendance and a couple of non-calls against Winnipeg.

“My take is it’s the same take that everybody in the building saw it as the refs looked at it, and they decided not to call it because we were already on the power play,” Boudreau said. “It cost us the game.

Connor’s shot attempt was blocked and Minnesota cleared the zone, but Morrissey corralled a loose puck in the neutral zone and passed ahead. Wheeler and Scheifele hurried across the blue line, with Scheifele careful not to touch the puck before Wheeler could get across.

Countering quickly, Scheifele had a give-and-go with Connor and snapped a one-timer past Wild goalie Devan Dubnyk with 28 seconds left in the first. Scheifele added his second goal and third of the playoffs on an empty net with 11 seconds left.

“That’s what this game is now,” Scheifele said. “The tiniest little holes is how you create offence. (Kyle Connor) made a great pass on that first one. It was right in the right spot, just away from (Matt Cullen) and I was lucky to put it in.”

Connor, Morrissey, Andrew Copp and Wheeler had assists as the Jets took command of the series heading back to Winnipeg for Game 5.

Dubnyk made 26 saves for Minnesota.

Hellebuyck posted his 13th career shutout and seventh of the season, some of the numbers that made him a Vezina finalist in his third NHL season. But his relative playoff inexperience had some wondering how he would recover from being pulled two nights earlier.

“We didn’t learn anything about him,” Maurice said of watching Hellebuyck come back with Tuesday’s steady performance. “But it certainly is a theme for him this year. He’s mentally very, very strong, very confident in his game. You knew, five to 10 minutes into that game, he was right and feeling good.”

Hellebuyck was at his best when the Wild had a chance for an equalizer early in the second on a three-on-one. Hellebuyck slid across the crease and knocked down Matt Dumba’s shot with his glove.

“He’s the reason why we made the playoffs and why we’re here,” Scheifele said. “He’s been the backbone of this team all year.”

The storyline heading into the game was about two missing players.

Winnipeg was without defenceman Tyler Myers, who was injured in Game 3 after a collision with Minnesota’s Marcus Foligno. The Wild lost forward Zach Parise to a fractured sternum.

Rookie Tucker Poolman, who played 24 games in the regular season, took Myers spot next to Ben Chiarot. Mathieu Perrault missed his third game of the playoffs.

Now, the Jets will learn if Morrissey will face discipline after his hit on Staal wasn’t called Tuesday. The league will likely take a look at the play, which looked vicious in game speed.

“I’m the tallest guy on the ice, he cross-checked me in the neck,” said the six-foot-four Staal. “There’s not much more you can say. Everyone saw it. I don’t know how no one with stripes saw it but that’s besides itself. It is what it is.

“We go from possibly (or) should be a 5-on-3 to a goal against eventually and that’s the game-winner.”

Morrissey said the incident was an accident. Maurice even called it a “missed call.”

“Complete accident on my part,” Morrissey said. “I hope he’s OK. He was able to play the rest of the game, which I was happy to see. I would never try to do that to anyone. I pride myself on playing the game really hard and competing. It’s the playoffs. Everyone’s really aggressive. It was a complete accident. My stick got up a little bit.”

Note to readers: This is a corrected version of an earlier story. The altercation between Josh Morrissey and Eric Staal happened in the first period, not the third.