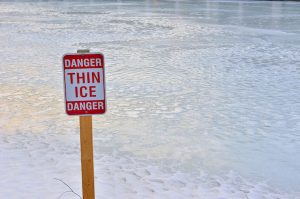 A woman was rescued after being clinging to a tree branch on the banks of the Red River in south Winnipeg on Saturday night. (FILE)

WINNIPEG — A woman was rescued from the banks of the Red River moments before she would have been swept away in its current.

Police and firefighters received a report of a woman screaming near the river in the 3400 block of Pembina Highway on Saturday night.

Crews responded at around 10:20 p.m. and were able to locate the woman with the help of the Air 1 police helicopter.

The chopper used its spotlight to illuminate the area for crews to rescue the woman before she lost her grip. Police say she was clinging to a tree branch between open water and spring ice before emergency responders arrived.

She was taken to hospital as a precautionary measure.