Home » Entertainment » Comedians Say ‘I Do’ at Winnipeg Comedy Festival

Comedians Say ‘I Do’ at Winnipeg Comedy Festival 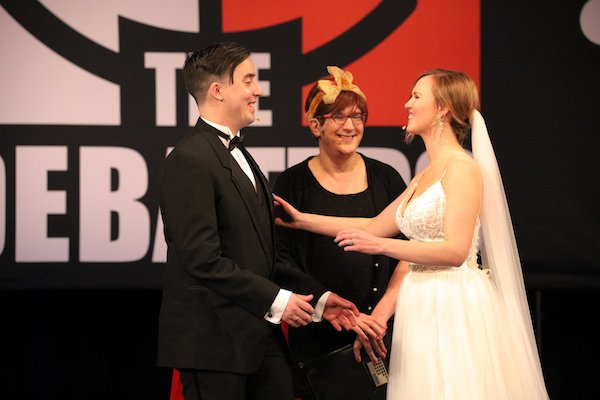 Comedians Tim Gray and Dana Smith tie the knot during a ceremony on stage at the Winnipeg Comedy Festival on Sunday, April 15, 2018. (WCF / FACEBOOK)

Two comedians, who debated on stage about getting married at the Winnipeg Comedy Festival, ended up tying the knot last weekend.

Comedians Tim Gray and Dana Smith, who were already dating, were performing in a skit as part of “The Debaters,” when Tim won the debate and married Dana after the show.

“It was an honour to marry Tim and Dana. I’ve known them both for many years, and they are a lovely couple,” said artistic director Lara Rae.

“It’s a good thing that Tim won the debate, too, because we bought a gigantic wedding cake, and if they didn’t end up getting married, then the WCF staff would be eating that cake for many weeks to come.”

The wedding ceremony was followed by a reception attended by their close friends and family at Club Regent Event Centre, Winnipeg Comedy Festival staff and volunteers, all the remaining comics who were still in Winnipeg.

Total attendance this year was 9,852 to see 90 comics in more than 30 shows spread across 10 venues.