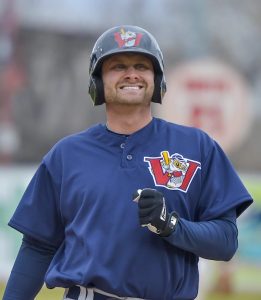 After spending the last two seasons in Fargo, the Winnipeg Goldeyes have re-signed all-time home run leader Josh Mazzola for 2018.

The third baseman played for the Fish from 2012-15, but played in all 100 regular season games Fargo-Moorhead RedHawks last year.

“I’m pleased to have Josh back in Winnipeg,” said Goldeyes’ manager Rick Forney.

“Josh has been a proven run producer since joining the American Association. His defensive versatility also provides us with more lineup options versus left- or right-handed starting pitchers.”

In 2012, the 32-year-old third baseman tied for third in the American Association with 18 regular season home runs before posting a .400 batting average in the playoffs.

Mazzola originally signed with the San Francisco Giants’ organization as a non-drafted free agent out of Missouri State University in 2008. In 10 years of professional baseball, Mazzola has helped his team to a winning record nine times, including six playoff berths and three championships.

The Goldeyes now have 24 players under contract for the 2018 season.