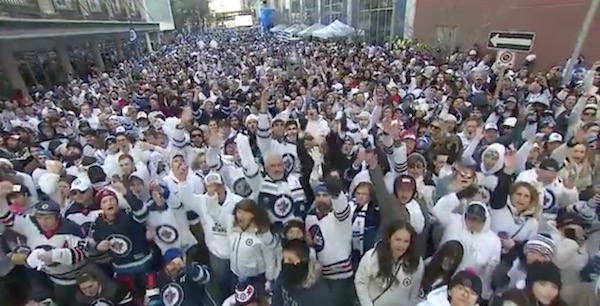 When the Winnipeg Jets play in Game 5 of the NHL playoffs on Friday, the Winnipeg Whiteout Street Party outside Bell MTS Place will be even bigger than before.

Economic Development Winnipeg says the party will now include Graham Avenue, as opposed to only Donald Street.

An additional television screen will be added — bringing the total to five — and more vendors and washrooms to create an expanded venue along Donald south of Portage Avenue.

Additional entry and exit points will allow for greater site access and movement, including new entry points on Graham and Hargrave, as well as Graham and Smith. This is in addition to existing entry points at Portage and Donald, and St. Mary and Donald.

About 9,000 people attended the second Whiteout Street Party on April 13.

People attending are encouraged to carpool, use public transportation, taxi, or ride-sharing services to and from the game.

Winnipeg Transit buses will be rerouted off of Graham Avenue from Carlton Street to Smith Street on Friday, April 20 beginning at 2:30 p.m. until the end of service to accommodate an expected increase in pedestrian traffic.

The Handi-Transit loading zone on southbound Donald Street at Graham Avenue will be temporarily relocated to eastbound Portage Avenue next to the Radisson Hotel, and in front of the Winnipeg Police Service Headquarters.