Nichols, Blue Bombers No Longer Have Element of Surprise in West Division 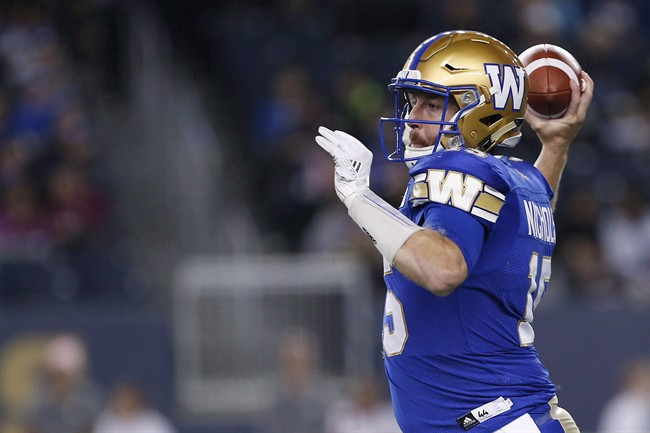 Winnipeg Blue Bombers quarterback Matt Nichols (15) looks for his receivers during the first half of CFL action against the Hamilton Tiger-Cats in Winnipeg Friday, October 6, 2017. (THE CANADIAN PRESS/John Woods)

WINNIPEG – Quarterback Matt Nichols and the Winnipeg Blue Bombers no longer have the element of surprise in the West Division.

In a conference call, Nichols said he expects the Bombers to be marked men in 2018 after compiling a combined 23-13 record over the last two years, reaching the CFL playoffs both times.

Winnipeg finished tied with Edmonton for second in the ultra-competitive West Division last season with 12-6 records but the Eskimos beat the Blue Bombers 39-32 in the conference semifinal.

After posting an 11-7 mark in 2016, Winnipeg’s season ended with a heartbreaking 32-31 decision to the B.C. Lions in the conference semifinal.