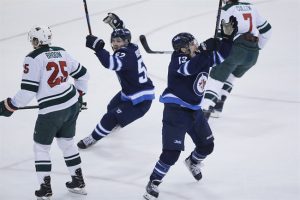 WINNIPEG – Bryan Little’s teammates were happy they could deliver something special to the veteran Winnipeg forward.

Connor Hellebuyck made 30 saves and the Jets scored four goals in the first period to eliminate the Minnesota Wild with a 5-0 victory in Game 5 of their best-of-seven series Friday.

It marked the first playoff-series win in franchise history, a club the 30-year-old Little joined in 2007-08 when it was the Atlanta Thrashers.

“He’s a guy that battles night in and night out,” said Mark Scheifele, who had a third-period goal and one assist. “He doesn’t get as much credit as he deserves.

“He’s a guy that I learned a lot from when I was younger. I’m still learning things from him. That’s what makes good leaders. They lead by example.”

Winnipeg’s previous post-season appearance was a sweep by Anaheim in 2015. The franchise had moved from Atlanta in 2011. The Thrashers started in 1999-2000, with their only playoff series ending in four straight losses to the New York Rangers in 2006-07.

“Playing in Atlanta, I wasn’t sure I’d ever get to experience playing on a team like this and playing in a city like this, where hockey is loved this much,” said Little, who tipped in a goal. “I just feel lucky to be a part of it.”

The victory was Hellebucyk’s second shutout of the series.

He tipped his hat to his teammates pumping in four goals on their first 10 shots of the game.

“I guess I did my job, right?” Hellebucyk said with a chuckle. “I didn’t let any in.

“I thought the team was great in front of me. The guys’ details are fantastic. Any time you can get that many (goals) in the first period, that kind of sinks the other team, especially deep in a series like this. They definitely got this one early.”

Defenceman Jacob Trouba scored on Devan Dubnyk 31 seconds into the first. That was followed up by goals from Little, Brandon Tanev and Joe Armia by 11:59 of the opening frame. Dustin Byfuglien had a pair of assists.

Dubnyk was pulled after letting in the quartet of goals. He was replaced by Alex Stalock, who stopped 15 of the 16 shots he faced.

The Wild were making their sixth straight appearance in the post-season. They only got as far as the second round in 2014 and ’15, when Chicago knocked them out both years.

The white-clad crowd of 15,321 at Bell MTS Place stood and began cheering and waving white towels with just over two minutes remaining, chanting “Go Jets go.” A similar-size crowd was outside the arena watching the game on giant screens at a “whiteout” street party.

Humboldt Broncos player Matthieu Gomercic was in attendance for the game. He was given a standing ovation when introduced by the P.A. announcer and shown on the jumbotron.

Winnipeg moves on to the second round of the NHL Western Conference playoffs. They’ll face either Nashville or Colorado. Those teams were playing the later game Friday, with the Predators ahead 3-1 in that series.

Winnipeg played some tight defence without top-pairing defenceman Josh Morrissey, who was suspended Wednesday for one-game for a cross-check on Wild centre Eric Staal in Game 4.

The Jets also had some good and bad injury surprises before the game.

Veteran defenceman Tyler Myers was back in the lineup after suffering a lower-body injury in Game 3.

However, forward Nikolaj Ehlers and backup goalie Steve Mason were scratched. Head coach Paul Maurice said Ehlers was ill with “a kind of a malaise.”

Mason hurt himself at the Friday skate. There was no update. Michael Hutchinson was called up from the AHL Manitoba Moose to replace him.

The Jets finished second in the league in the regular season with 114 points (52-20-10), setting franchise records for wins and points.

The victory was also notable because the original Jets last delivered a playoff-series win for the city 31 years ago. That franchise moved in 1996 and became the Phoenix Coyotes.