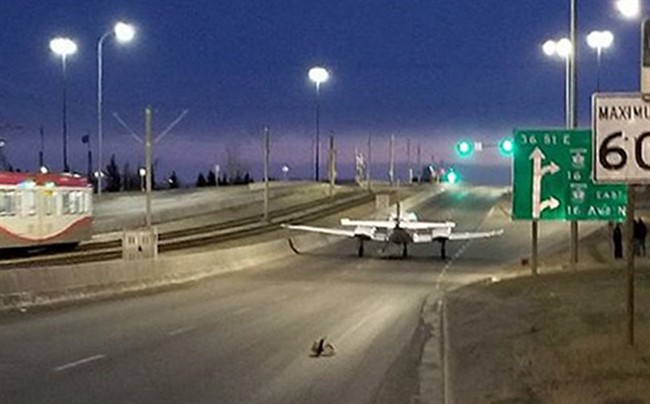 A plane sits on a street after making an emergency landing in Calgary on Wednesday, April 25, 2018. (THE CANADIAN PRESS/HO – Andrew Greig)

Police say the twin-engine plane was coming in from the south, heading for a landing at the Calgary airport, when the pilot radioed in that the aircraft was low on fuel.

Sgt. Duane Lepchuk said the plane came down shortly before 6:00 a.m. on a two-lane stretch of 36th Street, about five kilometres south of the airport and not far from the Trans-Canada Highway.

There were no injuries among the four passengers and two crew members.

Lepchuk said there was minimal traffic on the street at the time and no reports of drivers having to swerve to miss the plane.

“36 (Street) is an overpass that goes over the Trans-Canada,” noted Lepchuk, who said there was no indication the plane was damaged during the landing.

He also said the weather did not appear to be a factor during the emergency.

The plane remained on the street during the morning rush and police set up detours around the scene.

“This will be turned over to Transport Canada,” said Lepchuk

There was no immediate word on the origin of the plane’s flight, or who owns the aircraft.