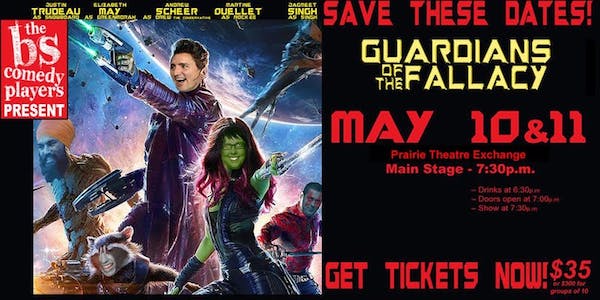 Its early origins from 1984 included men-only performers, but the show has since taken on a more inclusive since 2008. This year, the #TimesUp movement finds itself in one sketch during two shows at Prairie Theatre Exchange, May 10-11.

“While our current group has always celebrated and embraced diversity and equality, there was a time when it wasn’t always like that,” said BS Comedy Players marketing director Corey Quintaine.

“In this year’s show, in between roasting politicians, we reflect on the attitudes of the past and celebrate the strong women of our present.”

Sketches this year include a city hall fairy tale, a look at the state of Manitoba’s health care system, and a Trudeau-themed take-off of “Guardians of the Galaxy.”

“We’re so glad that he (Mitch) was willing to MC our show this year, as he continues his recovery from a 2016 stroke,” Quintaine added. “He truly is the heart and soul of BS, and this year he will be the literal ringmaster of our theatrical circus.”

The shows are locally-written and produced as the troupe uses satire, sketch comedy, song and dance to bring a fresh take on society and politics