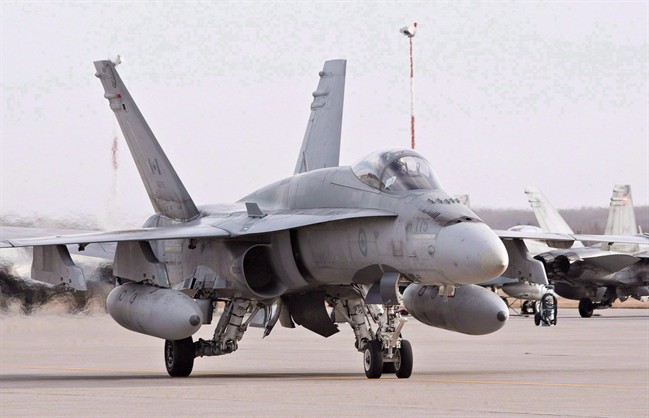 A pilot positions a CF-18 Hornet at the CFB Cold Lake, in Cold Lake, Alberta on October 21, 2014. (THE CANADIAN PRESS/Jason Franson)

Hockey fans will be looking way up on Tuesday as the Canadian Armed Forces conduct a flyby above the Winnipeg Whiteout Street Party.

“The aircraft will fly over the arena at an altitude no lower than 500 feet above the highest obstacle on their route. Flybys by RCAF aircraft are carefully planned and closely controlled for public safety, and are dependent upon weather and flying conditions,” an RCAF release said.

The actual jet is a significant show of aviation muscle compared to what Nashville fans “smashed” in their city last weekend. As part of its reputation of being “Smashville,” the team painted a tiny Beech 77 Skipper before raffling off opportunities for fans to smash the plane with a hammer.

The Winnipeg Jets tweeted about the “cute lil skipper plane,” saying that a real aircraft wasn’t likely in Nashville’s budget.

Guessing one of these weren’t in the budget…? pic.twitter.com/VaXlM5zr3a