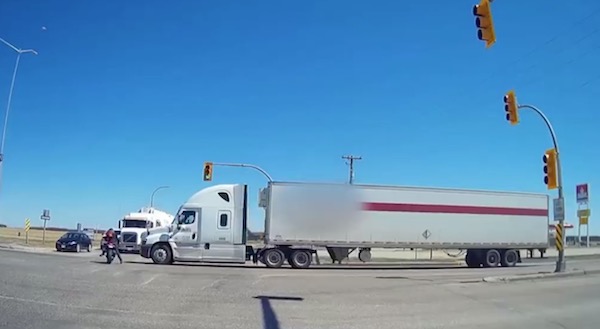 A screengrab from a video posted by RCMP on Tuesday, showing a semi-trailer truck colliding with a motorcycle on the south Perimeter Highway on April 24, 2018. (RCMP / FACEBOOK)

WINNIPEG — A motorcyclist is lucky to be alive after he was hit by a semi-trailer truck on the Perimeter Highway.

The accident was caught on dashcam April 24 when the semi ran a red light on the Perimeter at McGillivray Boulevard.

RCMP posted video of the collision on social media Tuesday, saying several witnesses reported the driver of the semi was on his cell phone at the time. The 50-year-old has been charged with distracted driving and running a red light. The fine for both is $406.

The motorcyclist suffered only minor injuries and was able to walk away from the crash.