Home » The Canadian Press » Feeling the Vibes of 2010, Dustin Byfuglien the ‘Great Equalizer’ for Jets

Feeling the Vibes of 2010, Dustin Byfuglien the ‘Great Equalizer’ for Jets 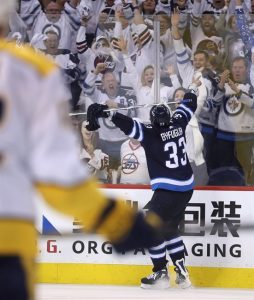 WINNIPEG – When he looks down the bench, Winnipeg Jets captain Blake Wheeler sees a lot of things.

There’s the relentlessness of Mark Scheifele, Patrik Laine’s deadly shot, and the playmaking ability of Nikolaj Ehlers. Josh Morrissey, Jacob Trouba and Tyler Myers are part of a solid defence corps, while goalie Connor Hellebuyck had a breakout year worthy of his Vezina Trophy nomination.

And then there’s Dustin Byfuglien.

“He’s the great equalizer,” Wheeler said following Tuesday’s 7-4 victory over Nashville Predators that saw the Jets take a 2-1 lead in their second-round series. “There’s nobody like him.”

Byfuglien was everywhere for Winnipeg in Game 3, especially after a forgettable opening 20 minutes that saw his team fall behind 3-0.

The six-foot-five, 260-pound defenceman scored twice, set up another, roamed all three zones seemingly at will, and led the Jets’ physical push against an opponent that didn’t have an answer.

He scored the second of three goals in a chaotic span of 2:51 early in the middle period — one that really signalled the comeback was on — before putting the Jets up 4-3 heading to the third at an electric Bell MTS Place.

“He can make an impact in a game in just about every single way possible,” Winnipeg head coach Paul Maurice said. “He can defend, he can play real physical, nobody wants to drop the gloves with him.

“And then there’s an offensive side … it’s a perfectly placed shot, quick hands, all the other things that he can do offensively.”

Byfuglien can also break it down, as he showed when he removed one of his gloves and performed an impromptu dance routine after his second goal Tuesday.

“It’s nice to see him get a little excited. It’s tough to get him to smile,” Wheeler quipped about his usually stone-faced teammate. “I’m being a little sarcastic here, but get him feeling like himself and what are you going to do?”

“I don’t know where some of this stuff comes from,” Byfuglien said in flashing a rare grin when asked about his celebration.

What the Jets do know is how important he is to their success with Game 4 against Nashville set for Thursday.

“Having him on our team gives us an advantage no matter who we play,” Wheeler added. “He has just dominated. You can’t stop it.”

Byfuglien has indeed been a force through eight post-season games, recording three goals and seven assists, and is now up to 0.71 points per game in his playoff career compared to 0.60 in the regular season.

The three-point performance in Game 3 of the best-of-seven Western Conference semifinal was his best in the playoffs since a four-point night in Game 5 of the 2010 Stanley Cup final when he was a member of the Chicago Blackhawks.

And Byfuglien’s starting to feel the mojo of that championship group.

“Any time you get into the playoffs, you can look back at what you’ve done and what you’ve gone through,” the 33-year-old said. “With that (Blackhawks) team, the things you had to go through to get here. You just do little things and control what you can control and just move on.”

Byfuglien was more of a rover than a defender in Game 3. He often found himself down low in the Nashville end or looking for blood in the neutral zone — Predators winger Viktor Arvidsson barely got out of the way of a hit in the third period that would have made Hall of Famer Scott Stevens proud.

“Buff gets a little bit of a long leash,” Wheeler said. “He’s so dynamic that he keeps plays alive and can make some really special things happen.”

But things weren’t happening for him earlier in the season, at least on the stats sheet.

Byfuglien was on a 33-game goal drought that stretched back to March 2017 before he finally scored his first of the campaign in early January.

Despite the frustration that Byfuglien, who finished with eight goals and 37 assists in 61 regular-season contests, must have been feeling, his coach saw an elevation in blue liner’s overall performance.

“The goals now will draw the camera to him, but he went a long stretch in the first half of the year where he was really, really good,” Maurice said. “He wasn’t scoring, there were questions about the quality of his play, but it was right. He’s built his game this year.

A man of few words, Byfuglien leads by example in this hockey-mad city that’s starting to dream big.

“It’s just a matter of coming to the rink, just playing hard, doing my job the best as I can,” he said. “Hopefully the guys can follow and get some energy off it.”

That was certainly the case in Game 3.