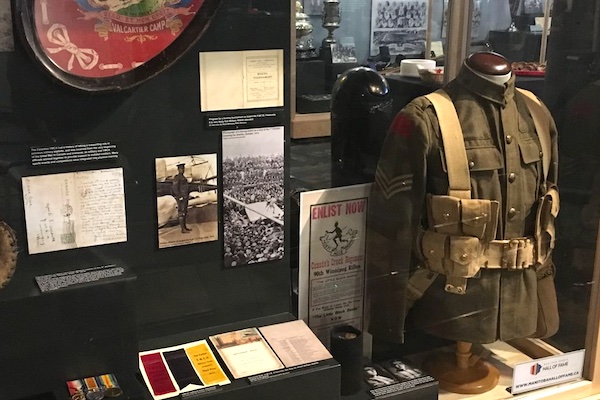 ‘Reflections of the Great War: Manitoban Athletes-In-Arms’ is now open at the Manitoba Sports Hall of Fame. (@CANADAGAMESSFLC / TWITTER)

A new exhibit featuring Manitoba athletes who fought in the First World War is now open at the Manitoba Sports Hall of Fame.

Reflections of the Great War: Manitoban Athletes-In-Arms was curated using digitized information from personnel records of the war, as well as archival materials such as badges, medals, articles of clothing and uniforms, and sports equipment.

“This collection, with some artefacts that are over 100-years-old, is truly remarkable,” said Jeff Hnatiuk, president and CEO of Sport Manitoba.

“We’re proud to showcase and celebrate Manitoba’s rich sport history with this exhibit with special attention to our athletes and teams who fought in the Great War.”

Some of the items include pink running shorts worn by Tommy Town, a champion long-distance runner, in the 1920 Olympic Games in Antwerp, Belgium, the pilot’s license belonging to Konrad Johannesson of the Winnipeg Falcons, and WWI military-issue canvas running shoes dated at over a century old.

“This has been a fascinating exhibit to build and develop. So many military organizations and their heritage institutions have been so generous with their artefacts and archives, their knowledge and expertise, and their support of the new exhibit,” said Rick Brownlee, Sport Manitoba’s sport heritage manager.

The exhibit will be on display at the Manitoba Sports Hall of Fame, located in the Canada Games Sport for Life Centre at 145 Pacific Avenue, until January 2019. Admission to the exhibit is $5 for adults, $3 for teens and seniors, and $2 for children 12 and under.