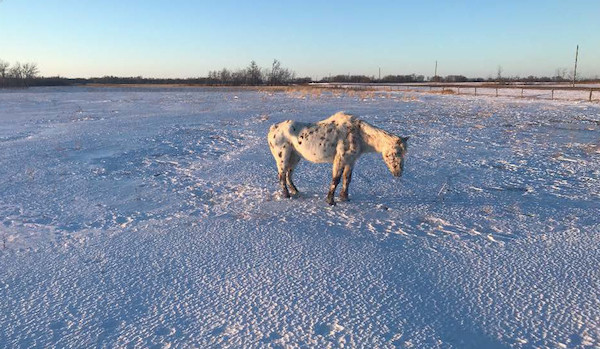 A starving horse was noticed by a passing RCMP officer near Melita on April 6, 2018. The animal was seized to be transported for proper care, but was eventually euthanized. (RCMP HANDOUT)

A starving horse alone in a Manitoba field caught the eye of a passing RCMP officer with the Melita detachment last month.

Cst. Kristin Foreman was on her way to another call on April 6 when she noticed the animal and knew something was wrong. After clearing the call, Foreman returned and saw that the animal was emaciated and extremely lethargic. It didn’t have access to food or water and there wasn’t any shelter in sight. 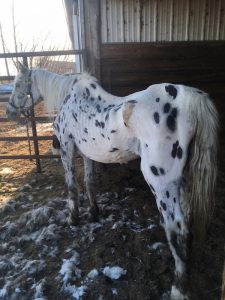 Community members helped her transport the animal from the field on Highway 256 South for emergency medical attention in Virden.

“I couldn’t leave Foxy there,” said Cst. Foreman in a release. “She was so small and so sick. There was nothing nearby that she needed for her survival. My duty is to assist anyone in distress, so that’s what I did.”

Foxy, who was determined to be a 35-year-old Appaloosa mare, was placed in a warm temporary boarding stable with food and water.

Foxy’s owners have been charged with numerous offences under the Animal Care Act.

On April 25, the decision was made by veterinarians to humanely euthanize Foxy Lady to prevent undue suffering as her health concerns were severe.

RCMP say further charges against her owners may be pending.