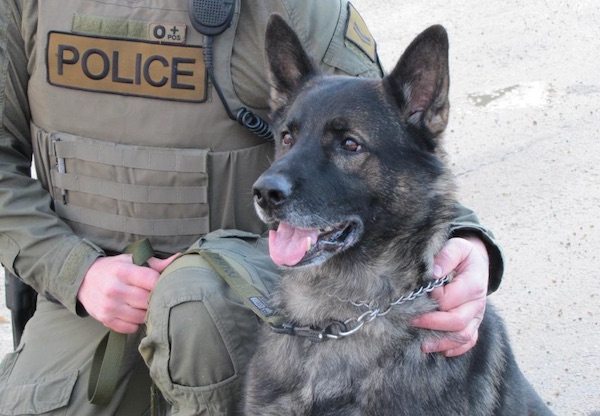 A police dog helped nab three suspects who crashed a stolen truck into a ditch east of Winnipeg on Wednesday.

RCMP with the Falcon Lake detachment were alerted to an 18-year-old woman who had flagged down a passing motorist on the west side of the Trans-Canada Highway west of Provincial Road 308 at around 10 p.m.

Police attended in the RM of Reynolds and found the pickup truck stuck in the mud on the other side of the tree line. Officers discovered the vehicle was stolen from Winnipeg and placed the woman under arrest.

RCMP called in a police dog to track down three other people who had also been in the truck before it crashed. Enzo picked up a scent of two people approximately two kilometres away hiding under a tree. A 36-year-old man and 36-year-old woman were arrested.

The dog then tracked a 26-year-old man hiding in long grass. He was arrested and charged with possession of stolen property, along with the three others.

Police say all four suspects are from Winnipeg. The two older suspects also had outstanding warrants with city police.