Mobile Devices to Sound Off with Emergency Test Signal This Week 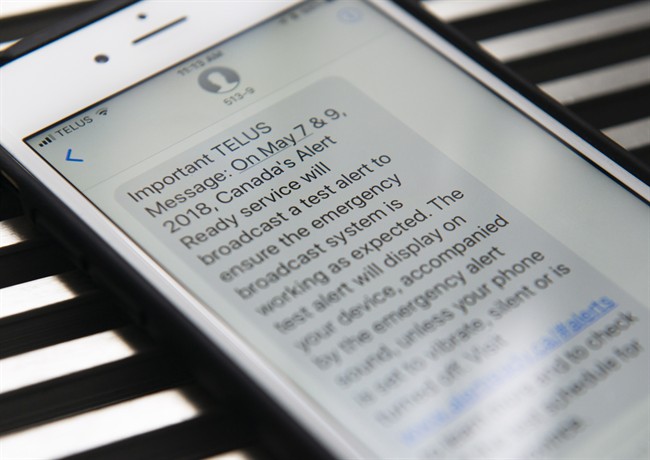 A text message from Telus is seen on a smartphone in Toronto on Friday, May 4, 2018. Mobile devices across Canada will be buzzing a little more than usual this week as emergency management officials test the new nationwide public alerting system. (THE CANADIAN PRESS/Graeme Roy)

If you hear an unfamiliar tone emitting from your cell phone this week, don’t be alarmed, it’s only a test.

Alert Ready, Canada’s public emergency alerting system, will carry out a nationwide test and push out notifications to every cell phone and tablet connected to an LTE network. Radio and television broadcasters will also take part in the alert.

Depending on your device settings, the tone will be an audible ambulance siren or vibrate for eight seconds. Devices that are turned off won’t receive the signal, users on a call will hear their conversations interrupted by a sound similar to a call-waiting tone.

The tests come after wireless providers were mandated by the Canadian Radio-television and Telecommunications Commission to implement a system capable of distributing warnings to communicate imminent safety threats such as floods, tornadoes, Amber Alerts or terrorist threats.

Manitoba Emergency Measures Organization (EMO) and Environment and Climate Change Canada are the only agencies authorized to issue Alert Ready messages in the province.