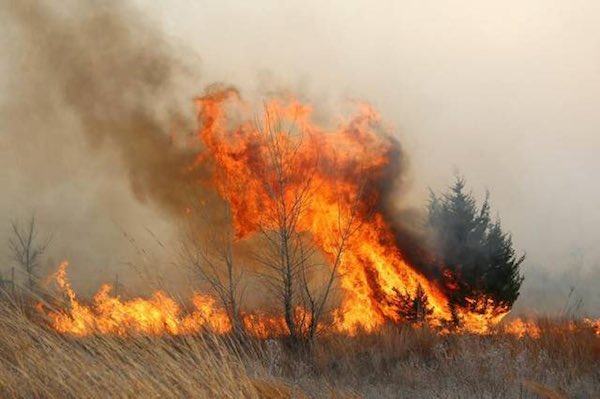 Winnipeg firefighters worked tirelessly over the weekend to put out a number of wildland fires in and around the city as a result of extremely dry weather conditions.

Crews responded to five significant fires, including one that claimed the lives of two men.

Calls came in Friday night for two fires southwest of Charleswood Road, including in a farmer’s field.

Firefighters and police later attended the 1500 block of Regent Avenue West for a field fire behind a row of businesses. Two men were taken to hospital and later succumbed to their burn injuries.

On Sunday, a grass fire in the area of Fort Gibraltar in St. Boniface sent crews scrambling to the area, where luckily no damage to structures were reported.

Later in the afternoon, a large grass fire along a rail line on Wilkes Avenue extended from Kenaston Boulevard to the Perimeter Highway. Several hydro poles, a fence and building materials were damaged.

A third fire in the 2000 Block of Hoka Street had firefighters attend the Transcona Bioreserve. No injuries and no damage to structures were reported.

Another fire was also fought in the area of Sterling Lyon Parkway and Shaftesbury Boulevard at the rear of Shaftesbury Park Retirement Residence. A nearby fence was damaged as a result. Crews remained on scene to tend to a number of hotspots until early evening.

The City of Winnipeg says a temporary open-air fire ban is in place on all public and private property until environmental conditions approve.