Home » Sports » Byfuglien, Hellebuyck the Most Mentioned Winnipeg Jets on Twitter During Playoffs

Byfuglien, Hellebuyck the Most Mentioned Winnipeg Jets on Twitter During Playoffs 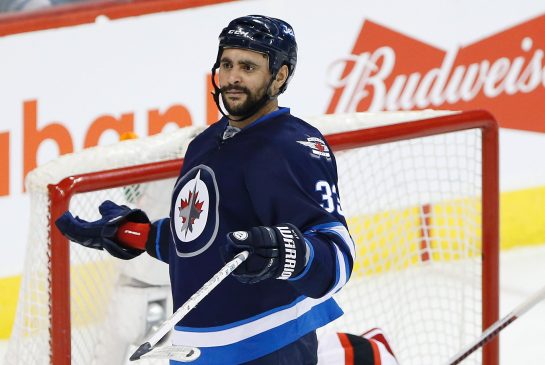 Well, of course Dustin Byfuglien is going to get the most mentions. (JOHN WOODS/THE CANADIAN PRESS)

It’s probably no surprise to any Winnipeg Jets fan, but over the first two rounds of the NHL playoffs, defenceman Dustin Byfuglien and goalie Connor Hellebuyck were mentioned more often than any other Jets player on Twitter.
“With each win, we’ve seen the Jets conversation grow and grow on Twitter,” says Christopher Doyle, head of sports partnerships for Twitter Canada.
“The Jets are a good example of the type of team that will pop on Twitter with a growing fan base, plus top names like Laine, Wheeler and Scheifele active on the platform itself.
“Almost half of the post-season Tweets about the Jets are coming from outside of Manitoba, which shows that the Jets have become a big topic for sports fans across Canada this spring.”
The Jets advanced to the Western Conference Final Thursday after a hard-fought seven-game series against the Nashville Predators. They will play the first game of Round 3 against the Las Vegas Golden Knights Saturday at Bell MTS Place.
Rounding out the Top 10 (and some other stats):
Where are the @NHLJets mentions coming from globally?
Where are the @NHLJets mentions coming from in Canada?
Most Tweeted games:

Fun fact: The #NSHvsWPG hashtag had twice as many mentions than the #WPGvsMIN hashtag, says Twitter.