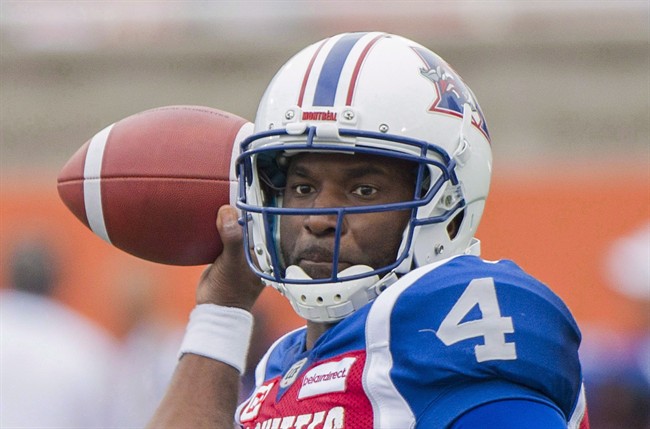 Darian Durant (4) throws a pass during first half CFL football action against the Hamilton Tiger-Cats, in Montreal on Sunday, October 22, 2017. The Winnipeg Blue Bombers added veteran depth to the quarterback position by signing Darian Durant to a one-year contract. (THE CANADIAN PRESS/Graham Hughes)

Winnipeg Blue Bombers backup quarterback Darian Durant says he is retiring, according to a blog post on his website, but didn’t tell the Bombers he was doing so.

Durant posted at about 7 a.m. Friday that he was grateful to the CFL, but had decided to retire.

“I have some opportunities away from the field that will allow me to transition smoothly into the next stage of my life.  I also became a father earlier this year and being able to see my daughter grow up day-by-day has played a big part in this decision.

“Last but not least, to my fans in Ridernation:  If you cut me open, I am sure that I would bleed green.  Saskatchewan and Regina will always be home.  I always strived to be a Rider legend, and I am honoured to be spoken of in the company of George, Ron, Roger & Gene!”

Durant spent the 2017 season in Montreal with the Alouettes after being let go by the Saskatchewan Roughriders. He struggled and was let go by the Alouettes in January. He then signed a one-year contract to play backup to Matt Nichols and was expected to suit up for the 2018 season.

“We were informed prior to the start of our mini-camp that Darian Durant, along with his family, was reconsidering continuing his career,” said Walters in a statement sent to media. “Given the magnitude of this decision, we asked him to take the time to thoroughly consider his options and inform us of his decision.

“Ultimately, Darian has not informed the team of his decision, but we were notified through social media this morning that he has decided to retire from professional football.

“While we respect his decision, we are of course are extremely disappointed. Until recently, Darian had given us every indication that he was accepting of his role as a backup and prepared to help our offense in any capacity possible.

“We will move forward with the quarterbacks we currently have on our roster.”

← Previous: Man, 87, Killed When ATV Flips Over in RM of Roblin Next: Byfuglien, Hellebuyck the Most Mentioned Winnipeg Jets on Twitter During Playoffs →
Tags: