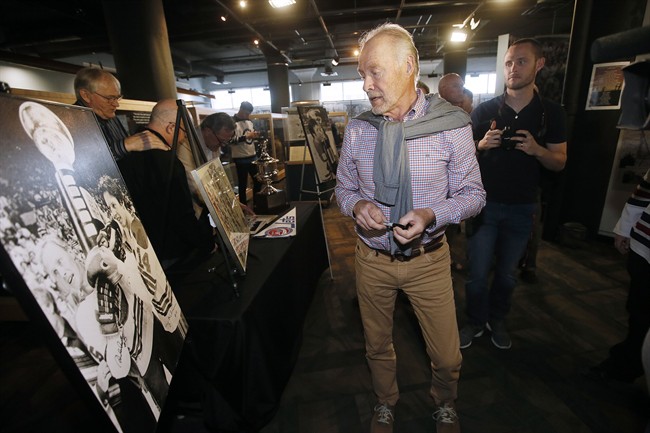 Former Winnipeg Jets player Anders Hedberg looks at a photo of himself and Ulf Nilsson holding the AVCO Cup at the Manitoba Sports Hall of Fame in Winnipeg, Friday, May 11, 2018. Many team members came to Winnipeg to celebrate the anniversary of winning the AVCO Cup in the World Hockey Association (WHA). (THE CANADIAN PRESS/John Woods)

WINNIPEG – Winnipeg was already in the grip of playoff fever.

Now, with the National Hockey League Jets advancing to the Western Conference final — further than they have even been in the NHL — the frenzy has jumped another notch.

Jets-themed merchandise is flying off shelves, downtown offices are filled with workers wearing Jets jerseys and organizers are having to cap attendance at 20,000 for street parties on game nights outside Bell MTS Place where the team plays.

The Jets take on the Vegas Golden Knights in the first game of the series on Saturday in Winnipeg.

The public display of passion surpasses the glory days of the Jets 40 years ago when they were champions of the World Hockey Association.

Stars of that team are in town this week to mark the 40th anniversary of the Avco-Cup-winning Jets in 1977-78.

“I don’t recollect any sporting event … bringing the fans into the downtown area and into the excitement that there is today,” said Joe Daley, the 1978 squad’s goalie. “I think it’s unbelievable what’s going on.”

Anders Hedberg, the right-winger who notched 63 goals in 1978 and later returned to his native Sweden, said he’s not surprised by how people in the NHL’s smallest market have filled the arena and the streets.

“To me … the relationship to the game is the closest here of all the teams in the National Hockey League.”

The street parties feature fans dressing up in white, watching on big screens next to the arena and listening to on-stage entertainment. Organizers decided Friday that for the rest of the playoffs, attendance will be capped and people will have to get free tickets in advance if they want to get in.

By Friday afternoon, some online ads were offering to resell those free tickets at $25 or more.

Fans can even taste the excitement. A chocolate-maker has started selling Jets-themed chocolates, shaped and sized like pucks, for $6.

“We sold out of the ones we had this morning, so right now everyone is working on (more),” said Constance Menzies.

The feeling has been a long time coming for Winnipeg. The Canadian Football League Blue Bombers haven’t won a championship since 1990 and the original Jets franchise never made it this far before leaving for Phoenix in 1996.

The new version of the Jets relocated from Atlanta in 2011 and were swept in the opening round in 2015, their only playoff appearance before this year.

“The entire city, you can really feel the energy,” said Josh Drury, who along with his wife splits time between home in Winnipeg and running a business in Las Vegas.

He says his loyalty lies completely with the Jets.

“This is really uncharted territory … Winnipeg sports fans are kind of used to disappointment.”

For Daley, who continued to live in Winnipeg after his playing days ended, the Jets’ playoff run gives the city some rightful swagger.

“It’s great for our city. We forget about all the shortcomings that everybody else in Canada thinks we have as a city.